The new ‘high balance’ conforming limits kick in, with a single-unit $625,500 maximum in Santa Barbara County, on loans originated after October 1, 2011. In fact, it is the older super conforming maximum enacted in 2008, before the ARRA stimulus act temporarily boosted it to $729,750. That leaves less than three months to originate loans under the current higher limits, which could hurt higher end housing.

“The apartment industry rebounded strongly in 2010 as demand for apartment residences outpaced the sluggish recovery in the job market nationally,” said NMHC Chief Economist Mark Obrinsky.  “These results show the apartment industry continues to do well even though the nation’s overall rate of economic growth has slowed.  This is driven largely by the increased appeal of renting generally but also by the large number of young people entering the housing market for the first time—and young people are much more likely to rent than buy.”

Reis, Inc. reported that vacancies fell in 72 of the 82 markets during the second-quarter vacancy rate to 6 percent, the lowest since 2008 and compared with 7.8 percent a year earlier. The average effective rent, the amount paid after discounting, was $997 in the second quarter of the year, up from $974 a year earlier ...Landlords filled a net 33,000 units in the second quarter, a slowdown from the 45,000 units they filled in the first quarter. Meanwhile, supply remains constrained. Roughly 8,700 new apartment units opened during the second quarter, the second-lowest quarterly tally for new completions since Reis began collecting data in 1999.

Calculated Risk shows rental vacancy rates have plunged from 11 to 9.5 percent, and probably have further to go. The most recent data show vacancies stabilizing around 8 percent. If so, that would corroborate Amy Hoak of Bloomberg Marketwatch’s contention that real estate investors are now picking up bargains.

“In fact, investors bought 20 percent of all the homes sold in April, according to the National Association of Realtors,” said Hoak. “Some of them are buying with cash.”

But even if they do finance part of the purchase, they’re able to turn around a profit much quicker than they would have been able to in the past, said William King, director of valuation services for Veros Real Estate Solutions, a supplier of housing data to the country’s largest banks, as well as government organizations. “And the return on rentals can be much better than returns on other investments these days,” he added. 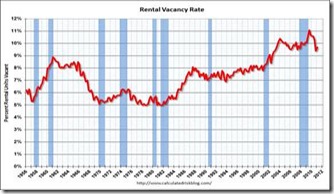 This is boosting construction spending, as we said last week. Strength for the latest month was led by a 3.1 percent improvement in private residential spending, following a 0.7 percent decline the month before.  However, the gain in this component was improvements as non-new home spending (i.e., remodels) jumped a monthly 7.6 percent after a 0.1 percent slip in March.  Even though new single-family construction is still moving sideways, it appears that two other components of residential investment will increase in 2011: multi-family construction and home improvement. 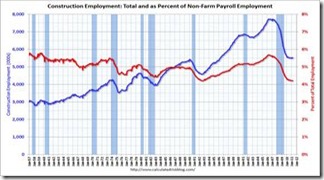 Calculated Risk has tracked residential construction jobs since 2002, and sees it again turning positive. Construction jobs have turned the corner in 2011, from a 149,000 loss in 2010, to a 31,000 jobs increase to date in 2011. And rental vacancy rates have declined from an 11 percent high to 9.5 percent, as we said.

Pending sales of future existing home closings rebounded 8.2 percent in May, following a drop of 11.3 percent the month before. Led by the West and Midwest, all four regions showed respectable gains.  The pending sales numbers—based on contract signing—point to the direction of existing home sales (based on closing transactions) over the next one to three months.  Given the volatility in the data, a three-month average suggests that the underlying current trend is still flat.  The pending home sales index, however, is up 13.4 percent on a year ago basis. We will see.

And sales of existing homes failed to pick up in June, slipping 0.8 percent to an annual adjusted rate of 4.770 million. More homes are coming on the market. Certainly, some of the increased supply is seasonal but months’ supply is now back up to 9.5 months at the current sales rate versus 9.1 months in May.  This is still lower than the recent high of 12.5 months in July 2010. 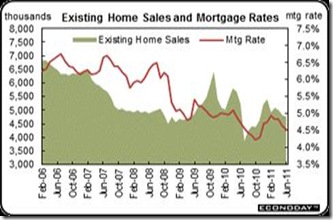 The existing-home median price did jump a monthly 8.9 percent to $184,300 with the year-on-year rate moving into positive ground for the first time this year at plus 0.8 percent. But this may be based on jumbo home buyers rushing to close on the current conforming high balance limit. So dropping the high balance limit come Oct. 1 may adversely affect housing prices in the short term. This is not the time for Fannie/Freddie to cut back their conforming program, in other words.

It's impressive that you are getting thoughts from this article as well as from our dialogue made here.

Please let me know if you're looking for a writer for your site. You have some really great articles and I think I would be a good asset. If you ever want to take some of the load off, I'd absolutely love to write some articles
for your blog in exchange for a link back to mine.
Please shoot me an e-mail if interested. Regards!

This is really interesting, You are an excessively professional blogger.
I've joined your feed and sit up for looking for more of your excellent post. Also, I've
shared your site in my social networks

Thank you for the auspicious writeup. It in fact was a amusement account it.

Look advanced to far added agreeable from you! However, how can we communicate?

Feel free to surf to my website; IT consulting Johannesburg

My spouse and I stumbled over here by a different web page and thought I should check things out.

I like what I see so i am just following you. Look forward to looking into
your web page again.

Feel free to visit my homepage; property For sale

I'm not sure where you are getting your info, but great topic. I needs to spend some time learning much more or understanding more. Thanks for wonderful info I was looking for this info for my mission.

Feel free to surf to my web blog ... photography in Cape Town

Good day! I could have sworn I've visited your blog before but after going through many of the posts I realized it's new to me.
Regardless, I'm definitely happy I discovered it and I'll be bookmarking it and checking back frequently!

What a stuff of un-ambiguity and preserveness of precious
knowledge concerning unexpected feelings.

Hiya! I know this is kinda off topic however , I'd figured I'd
ask. Would you be interested in trading links or maybe guest writing a blog post or vice-versa?
My site goes over a lot of the same topics as yours and I believe
we could greatly benefit from each other. If you happen
to be interested feel free to send me an e-mail. I look forward to hearing from
you! Fantastic blog by the way!

If some one wants expert view concerning blogging and site-building then i advise
him/her to pay a visit this web site, Keep up
the nice work.

my web page ... visit this site