We Have Reached Full Employment!

The U.S. added a modest 138,000 new jobs in May and hiring earlier in the spring was weaker than initially reported, adding to evidence that the tightest labor market in years is making it harder for companies to fill open jobs. So is this as good as it gets for employment and jobs?

The unemployment rate dropped to 4.3 percent because 429,000 workers dropped out of the civilian labor force, while the number of employed fell by 233,000 in the Household survey—one of two reports put out today by the Labor Department. 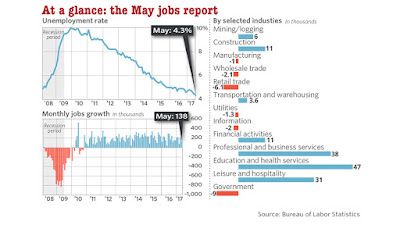 But a very good total of 2.23 million jobs were created over the past 12 months, yet there are 5.7 million unfilled jobs in April, according to the BLS JOLTS report. In fact 429,000 fewer looked for work, either because they couldn’t find the job they liked, or more women are leaving the workforce to raise families according to one survey. Jobs are going begging, in other words, which is another sign of full employment.

As recently as 1990, the United States had one of the top employment rates in the world for women, says a 2014 NYTimes Upshot article, but it has now fallen behind many European countries. “After climbing for six decades, the percentage of women in the American work force peaked in 1999, at 74 percent for women between 25 and 54. It has fallen since, to 69 percent today.”


The reason? The lack of maternity leave and other social programs that would support child raising. In a New York Times/CBS News/Kaiser Family Foundation poll of nonworking adults aged 25 to 54 in the United States, conducted last month in the same Upshot article, “61 percent of women said family responsibilities were a reason they weren’t working, compared with 37 percent of men. Of women who identify as homemakers and have not looked for a job in the last year, nearly three-quarters said they would consider going back if a job offered flexible hours or allowed them to work from home.”

So where do we go from here? What will draw those back into the labor force the approximately 6 million working age adults that no longer want to work at the moment? There is plenty of job growth in Health, Leisure and Hospitality, Professional and business services, and construction, since the housing market is still perking along.

Maybe we should forget about that magical 3 percent GDP growth goal the Trump administration says we can reach with their proposed tax and regulation cuts. The US population isn’t growing as fast as during the baby boom and labor productivity is stuck in the 1 percent range, in part because businesses aren’t investing in new plants and equipment, as we said yesterday.