Who Is Fully Employed in January? 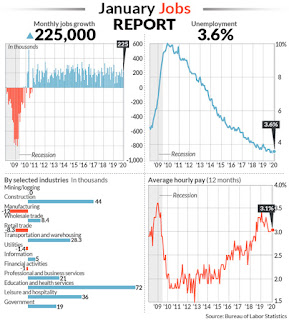 It looks like everyone is employed in the service sector, but manufacturing is sputtering. There were 44,000 new construction jobs and a whopping 72,000 in Education and health services. But manufacturing lost another 12,000 jobs in January; the same as in December.

That is why average hourly earnings (i.e., wages) are barely rising above inflation, and interest rates and inflation remain so low. This ‘goldilocks’ scenario must be due to the 2-year trade war, and now China’s coronavirus pandemic that the World Health Organization has called a “global public-health emergency.”

In other words, American consumers are scooping up lots of cheap consumers goods from other countries, but manufacturers aren’t exporting enough to create a positive balance of payments;
therefore stock and bond prices are gyrating when the world economy doesn’t seem to know what to make of China’s coronavirus that has now spread to some 23 countries, according to latest reports.

Here are the latest coronavirus numbers, according to the Washington Post, as it is approaching the SARS pandemic totals of 2003, and may turn out to be more deadly as the virus mutates into a possibly more virulent strain:

Chinese health officials say they confirmed more than 31,000 cases of the coronavirus, more than 4,800 of them considered severe. The death toll surpassed 1000, with fatalities almost entirely confined to China.

● An additional 41 people on board the Diamond Princess cruise liner, which has been quarantined in Japan, have tested positive for coronavirus, bringing the total to 61.
● Another cruise ship, the Westerdam, is at sea, and its crew is unsure where to go next, after being denied entry to the Philippines, Japan and South Korea. Passengers blame an ill-advised port stop in Hong Kong, where the boat took on many new passengers.
● Two charter flights carrying about 300 Americans out of the virus-hit city of Wuhan are expected to arrive in the United States on Friday. A flight carrying mainly Canadian evacuees landed in Ontario on Friday morning.

So let us take some comfort that American jobs aren’t yet at risk. In fact, the 2003 SARS pandemic occurred during the housing bubble, and record economic growth during that decade. But what followed was the Great Recession.

That’s why most economists aren’t touting January’s very robust job numbers as a harbinger of a better year just yet. There may be more bad news coming, and interest rates are still at record lows, which mean the financial markets are hedging their bets for another rainy day.