Retail sales jumped 5.1 percent year-over-year in October, which means this recovery is much stronger than forecast. But the question for economists will be, can it continue with the ongoing winter COVID-19 surge? It’s incredible that consumers are spending so much when this winter season has just begun and the worst is yet to come.

Higher home improvement/gardening, electronic, and online sales drove the increase. “The level of real consumer spending entered the fourth quarter well above the Q4 average, but this and other measures suggest that it is leveling out quickly,” said Reuters.

Maybe the public is believing “Yes, we can” again with the looming approval of several COVID-19 vaccines? This is while US manufacturing is also in partial recovery, with the Federal Reserve reporting that that overall industrial production rose 1.1 percent.

“Among the major industrial sectors, the biggest surprise was in motor vehicles and parts manufacturing, which was flat versus our forecast of a moderate increase,” said Reuters.  “Other categories were close to expectations, with non-auto manufacturing up 1.1 percent, mining down 0.6 percent and utilities up 3.9 percent.”

But it is still a tentative recovery with consumers holding back from spending at pre-pandemic levels, in part because only 10 percent have seen an improvement in their finances. It’s become evident that he income/wealth  inequality has only worsened and will damage any recovery unless something is done about it.  Some economists are beginning to fear a second recession may be looming, we well, with the rising coronavirus death toll. While the U.S. makes up 4 percent of the world’s population, it has had 20 percent of all COVID-19 cases. As of Wednesday, the U.S. had reported 11 million coronavirus cases and 248,687 COVID-19-related deaths, just ahead of India (8.9 million cases to date), according to Johns Hopkins University. 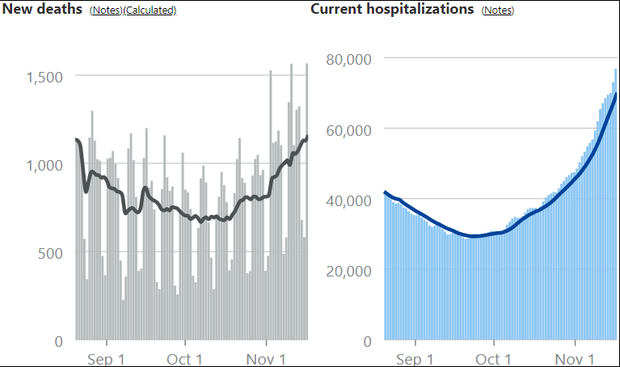 Economist James K Galbraith said recently in Project Syndicate, “As for the economic effects, the US has experienced the partial rebound I predicted in March. But I believe now, as then, that this will be followed by a long struggle, for three fundamental reasons, beyond the pandemic itself. First, there is the collapse in global investment, which affects the economy’s advanced sectors. Second, the impulse to save in the face of economic anxiety will devastate services providers, and the jobs and incomes they provide, affecting millions of workers. And, third, unpayable debts are piling up, affecting the entire system.”

What can get us out of a possible second recession? “Progressives should ignore the tired chatter about “excessive” deficits and public debt,” said Professor Galbraith, “and, to tackle inequality, they should vote to increase the top income tax rates and restore the bite of the estate and gift taxes.”

I agree with him—because the wealthiest have not been using their tax savings from the Republicans’ 2017 tax cuts that would boost anything but their stock price, whereas returning some of the 2007 tax cut revenue to Treasury could finance some very necessary recovery spending.

Tackling the record income inequality will also cure some of the discontent that has brought out unhappy populists in the Midwest and South that supported Trump. They are mainly in those red states that have suffered most from job losses, and now the pandemic.

Posted by Popular Economics Weekly at 9:41 AM