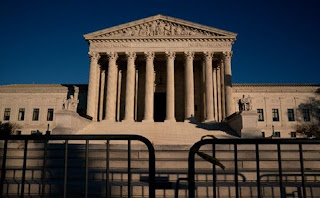 Texas, 17 other red state Attorneys General, and 126 Republican House members tried to keep President Trump in power after January 20 by breaking election laws and ignoring the United States Constitution. But the Supreme Court, arbiter of the Constitution, said they had no basis to sue four Democratic states after the election had been decided.

This has led Texas’ GOP Party Chair Alan West to suggest that these states should secede from the United States (which was quickly disavowed by other state GOP leaders).

West and Texas Republicans were in fact still fighting their own version of the 1860s civil war that abolished slavery in suing to overturn the will of a majority of Americans. President-Elect Biden was certified by the Electoral College as our new POTUS and Kamala Harris as our new Vice-President Elect on December 7.

Turning the Supreme Court’s decision on its head, West said, "This decision establishes a precedent that says states can violate the US constitution and not be held accountable," in a statement following SCOTUS’s Friday-night ruling. "Perhaps law-abiding states should bond together and form a Union of states that will abide by the constitution.”

Ben Schatz, the Democratic senator for Hawaii, said Mr West’s statement revealed that the Texas Republican Party had lost its mind, in a post to Twitter.

“The Texas Republican Party is officially in favor of leaving the Union. They have lost their minds,” wrote Mr Schatz. “Biden will be President, but these people are deadly serious about secession and sedition.”

If those red states had ever thought about what they were doing, or even why they were doing it—which they obviously hadn’t—they would have realized many would be bankrupted if they ever wanted a separate union.

They would be in danger of losing much of $437.596 billion in transfer payments made to them from the federal government that is above what they contributed to the US Treasury in FY 2018, according to the Rockefeller Foundation.

There were six states like New York and New Jersey that have large tax revenue surpluses totaling $51.4 billion which are distributed to poorer, mostly red states by the federal government, such as Kentucky that has a $45 billion deficit in their balance of tax payments with the federal government.

The tax surpluses from the richer states are paid out as part of transfer payments (e.g., social security, Medicare, Medicaid, SNAP, welfare) to members of the poorer, mostly red states.

This in fact is why America is a prosperous country—wealthy states help to support the federal programs of citizens in the poorer states. No one state can pull down other states because of its financial problems, and its citizens know they will be covered by our central government, whether in blue or red states.

Then why have Republicans under Trump continued their attempts to overturn the election results? NY Times’ Op-ed columnist Charles Blow said it best. Trump realized that trying to steal the presidency is more lucrative than being president with his calls for donations to his re-election Super Pac that now total more than $200M. In conning his base into believing he won the election, “We are witnessing one of the greatest grifts in history,” said Blow.