A New Year’s Wish—Greater Prosperity for All! 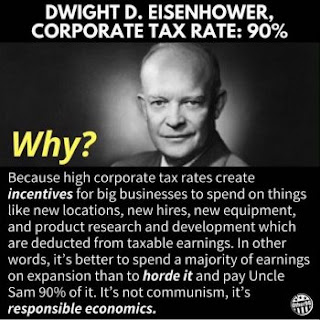 Although this cannot happen until results of the 2020 presidential election overturn a Republican Senate, I wish for something that President Eisenhower has said best. With higher tax rates that prevailed in the 1950-1970s, corporations in the past chose to spend their wealth on investments for future growth that were tax deductible, rather than pay the government.

Corporate tax rates since then have dropped to a low of 21 percent today.  What have corporations done instead with their record profits? Rutgers Economic historian James historian has been sounding the alarm about the results:


” So corporate profits do not drive economic growth — they’re just restless sums of surplus capital, ready to flood speculative markets at home and abroad. In the 1920s, they inflated the stock market bubble, and then caused the Great Crash. Since the Reagan revolution, these superfluous profits have fed corporate mergers and takeovers, driven the dot-com craze, financed the “shadow banking” system of hedge funds and securitized investment vehicles, fueled monetary meltdowns in every hemisphere and inflated the housing bubble.”

The architects of the Reagan revolution tried to reverse these trends as a cure for the stagflation of the 1970s, said Professor Livingston, but couldn’t. “In fact, private or business investment kept declining in the ’80s and after. Peter G. Peterson, a former commerce secretary, complained that real growth after 1982 — after President Ronald Reagan cut corporate tax rates — coincided with “by far the weakest net investment effort in our postwar history.”

There are many ways to look at the huge wealth disparities suffered by Americans whose household incomes have stagnated since the 1970s, when maximum tax rates were still in the 70 percent range. Americans wanted lower taxes so they could become voracious consumers, rather than pay for government services, which caused public investment to decline at the same time that it became the government’s job to create all the necessary public investments to protect consumers, and invest in their future.

It was public spending that in the past had enabled the building of our modern infrastructure of interstate highways and energy grid, as well as scientific research that led to the moon landing and Internet, for starters.

President George W. Bush’s tax cuts had similar effects between 2001 and 2007: real growth in the absence of new investment. According to the Organization for Economic Cooperation and Development, retained corporate earnings that remain uninvested were 8 percent of G.D.P. in 2000.

They have reached a record 14 percent of G.D.P. since then, even with a looming $1 trillion annual federal budget deficit.

Sadly, corporations began to spend their growing wealth from lower taxation on themselves and their lobbyists that where able to push through legislation to strengthen their monopolistic consolidation (via deregulation) and labor unfriendly legislation,

It has resulted in the likes of such undemocratic lobbying entities as ALEC, the American Legislative Exchange Council, the advancer of red state policies such as voter ID laws that restrict voting rights, protector of NRA gun rights like Florida’s Stand Your Ground law that protects shooters rather than their victims, and the fossil fuel industry that has no interest in protecting our environment.

The ironic result is that consumers haven’t become wealthier with all the available and cheap consumer goods, haven’t really benefited from higher GDP growth, even with the increased employment we have today in lower-paying service jobs.

The decline in corporate tax rates to the current 21 percent has been disastrous for householders’ wealth and health. It is at the core of America’s record income inequality.

So let us wish for a greater prosperity for all in the New Year!