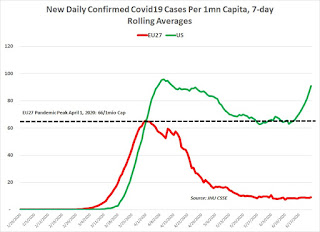 Conquering the pandemic really means depending on the cooperation across borders of races and ethnicities that separate regions and countries. COVID-19 is winning the battle in those countries and states that believe in isolation rather than cooperation; such as the red US states of Texas, Arizona, and Florida, or authoritarians that isolate their countries to maintain their power, such as Brazil and Russia.

Mother Nature’s latest Haymaker—COVID-19—will win in any encounter with the followers of an ideology choosing to ignore the safety measures in the name of self-reliance that protect them from COVID-19’s ravage (the US, for example, vs. European countries like Denmark and Norway that locked down their economies early and are recovering more quickly).

The best evidence that shows who wins the battle with this pandemic is to compare countries that believe in educating their populace in the scientific and economic advantages of cooperation during a pandemic—e.g., European countries with advanced social safety nets—with the Trump administration’s refusal to even acknowledge that this novel coronavirus is worse than the ordinary flu (see above graph).


“European countries have used a combination of lockdowns, public health guidance, tests and contact tracing to beat back the virus,” said NY Times’ David Leonhardt in a recent View column. “Large parts of Europe have begun reopening, including schools, so far without sparking major new outbreaks.”

It’s productive to look at the Nordic countries because Sweden is also an outlier in having chosen not to lock down its economy. Early results after three months of the pandemic show that Sweden didn’t benefit at all in economic growth by ignoring the safety measures, and suffered the consequences with its higher death rate, according to JF Kierkegaard of the Peterson Institute for International Economics.

Why? Sweden’s industries depended on supply chains for parts and equipment from other countries that were in lock down to protect their own citizens. Whereas Norway’s GDP, for example, is predicted to shrink -3.9 percent this year, Sweden’s GDP could have a -4.5 percent drop, according to their central banks.

The novel coronavirus can only be defeated by the sharing of wealth and knowledge. COVID-19 exposes those that refuse to share their wealth.

Sharing also means caring, as economic activities will return where shoppers feel safe in our modern consumer-dependent economies. That does not bode well for American consumers in particular who worry about the uncertain healthcare coverage provided by their employers if they have job to return to.

It doesn’t bode well for business confidence as well if the safety guidelines recommended by the World Health Organization (WHO) aren’t followed by all countries.

Senator Elizabeth Warren said it best at the beginning of her political career: “There is nobody in this country who got rich on their own. Nobody. ..You built a factory and it turned into something terrific or a great idea - God bless! Keep a hunk of it. But part of the underlying social contract is you take a hunk of that and pay forward for the next kid who comes along.”

And there is no country that got rich on its own, a truth that is lost on those who won’t understand what Mother Nature is telling us.