What is This Election Really About? 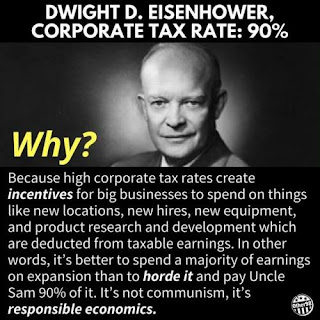 Now is the time to cure our record income and wealth inequality, since it’s not only adversely affecting the most vulnerable during this pandemic—including our mostly low-income essential health care and public safety workers—but overall economic growth, and hence any chance of a robust recovery from the current pandemic-induced recession.

According to the Center for Economic Policy and Research cited in an LA Times Op-ed, before the pandemic the U.S. counted 30 million workers in the categories we now consider essential: grocery clerks, nurses, cleaners, line cooks, warehouse workers, bus drivers and more. According to data from the Kaiser Family Foundation published in early May, 1 in 4 essential workers report having difficulties affording basic household expenses, and 1 in 7 are uninsured.

President Eisenhower’s admonition that corporations must pay their fair share to support economic growth is part of the solution to those problems.

I’ve written before about the growing income and wealth inequality that puts America’s distribution of family income ranking closer to Cameroon and Mozambique than the developed countries, according to the CIA World Factbook.

But the coronavirus pandemic has made returning to some degree of income equality that last prevailed in the 1970s more urgent than ever. Our record income and wealth inequality is a major reason for the growth in low-income workers.

U.S. economic growth has been anemic since the Great Recession—even with Republicans’ spectacular 2017 tax cut bill that mostly benefited Wall Street and corporations. The tax cuts were designed to benefit corporations, whose tax rate was cut to a rock bottom 21 percent from 36 percent, giving corporations a profit windfall.

President Eisenhower’s simple explanation for the 90 percent maximum corporate tax rate that prevailed in the 1950s and 1960s was to encourage corporations to grow and develop “new locations, new hires, new equipment, new product research and development” that would grow the country, rather than “hoard it and pay Uncle Sam.”

But something happened in the 1970s to make taxes and big government unpopular, says Kurt Andersen in his new book, Evil Geniuses, The Unmaking of America (2020, Random House).

Higher marginal tax rates that squeezed growing middle class incomes was certainly part of it, but anti-government, anti-labor sentiments and policies enacted during the 1980s that lowered maximum tax rates put the finishing touches on any possibility of income equality for the 80 percent of salaried workers that no longer shared in the productivity gains from government-financed Research & Development (e.g., Internet, AI, space exploration).

Rutgers University economic historian James Livingston sounded the alarm in a well-known NY Times Op-ed: It’s Consumer Spending, Stupid, some years ago when he showed that corporations for the most part have been using their profits to speculate rather than invest in their future. With lower tax rates they no longer had the incentive to invest in the public good (and America’s future), in other words.

“Between 1900 and 2000, real gross domestic product per capita (the output of goods and services per person) grew more than 600 percent,” said Professor Livingston. “Meanwhile, net business investment declined 70 percent as a share of G.D.P...Since the Reagan revolution, these superfluous profits have fed corporate mergers and takeovers, driven the dot-com craze, financed the “shadow banking” system of hedge funds and securitized investment vehicles, fueled monetary meltdowns in every hemisphere and inflated the housing bubble.”

In other words, this election is not only about choosing a government that can vanquish COVID-19 with effective health care policies, it’s about improving the lives of most Americans. We know there are many programs that would improve income inequality—beginning with a higher minimum wage, enhanced public spending on a better social safety net.

Raising corporate taxes back to historical levels is a start that would enable government to finance some of those necessary changes; or corporations could again heed President Eisenhower’s admonition and spend their monies where it will do the most public good.

Posted by Popular Economics Weekly at 7:20 AM