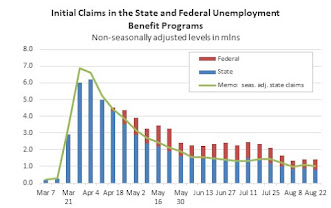 The initial claims for unemployment insurance curve has flattened, rather than continuing to decline as the US economy opens. Not a good sign for future job growth.  Why? The coronavirus infection rate hasn’t declined, in a word, and studies are showing that consumer fears of COVID-19 are hurting the economy more than government decrees to combat the virus.

There were a seasonally adjusted 1.06 million new claims this week, and initial claims have been hovering around the 1 million marker for 3 weeks. The question is when will it decline further, indicating more hiring. But new research posits that may not be happening soon.

The National Bureau of Research (NBER) just put out a Working Paper entitled “Consumers Fear of Virus Outweighs Lockdown…” showing that fear of the effects of COVID-19 outweigh the government restrictions on business operations in causing the “steep drop in business activity.”

This is while CDC director Robert Redfield recently warned in a WebMD interview that America is bracing for “the worst fall, from a public health perspective, we’ve ever had.”

He feared that when the second, or third surge, in the pandemic arrives (depending on who’s counting) with the fall flu season, unemployment might rise again, maybe to levels not seen in recent history. We are still at a 10.2 percent unemployment rate, and next Friday’s August unemployment report might not show any improvement in the rate but may even worsen.

“By comparing counties with and without restrictions, the NBER researchers conclude that only 7 percentage points of the 60 percentage points overall decline in business activity be attributed to legal restrictions,” said their public summary of the report. “Most of the decline resulted from consumers voluntarily choosing to avoid stores and restaurants.” 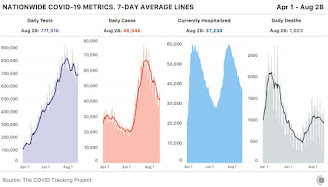 And average daily deaths haven’t yet declined from more than 1,000 per day since July and the summer openings. So, any lifting of those restrictions will not have much effect until consumers feel safe enough that the COVID-19 pandemic is under control.

In fact, the researchers’ counter-intuitive conclusion is that lifting lockdowns could have the unintended effect of discouraging consumer spending (which drives 70 percent of economic activity these days), “if repealing lockdowns leads to a fast enough increase in COVID infections and death.”

Retail sales rose 1.2 percent in July, the government said. Economists polled by economists had forecast a 2 percent advance. Receipts have slowed from a 8.4 percent increase in June and a record 18.3 percent gain in May when the economic rebound began. In other words, consumers may be seeing the writing on the wall as we approach the cold season.

There are other more heartening signs that fall economic growth could surge. Real PCE spending rose by 1.6 percent in July.  The combination of the July gains and the upward revisions to May and June puts real spending in July 8 percent above the Q2 average, which guarantees a very large contribution to Q3 GDP from the consumption component.

The consensus is that GDP growth should spring back some 26 percent from its 32 percent drop in Q2. That could mean an end to the current recession that officially began in February, but no assurance there wouldn’t be a repeat unless consumers feel safer than they do today.

What’s the alternative if consumers still live in fear that COVID-19 hasn’t been controlled, and a safe and effective vaccine isn’t developed for, say, another year that can protect 300 million plus Americans.