2020—A Year of Living Dangerously 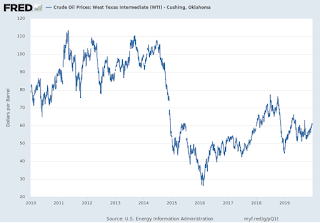 There is plenty of speculation on the effects of killing Iran’s Quds Force General Qassem Suleimani. Of course the first question is how Iran will retaliate? But terrorist attacks by its proxies, such as Iraqi militias that were bombed by the U.S., should be the least of our worries.

More important is the effect on world oil prices and economic growth in general, since the only reason the U.S. economy is continuing to grow is very low inflation coupled with very low, recession level interest rates. And that can’t be maintained if oil prices spike for some reason.

Texas intermediate crude prices per barrel stayed in the $100 per barrel range from 2011 to 2015, per the above FRED graph, before coming down to the $50-$60 range in 2015. It was a major reason economic growth hasn’t risen above 2 percent this decade.

I say recession-level rates, since current interest rates were last this low during the Great Recession. The Federal Reserve had to lower interest rates three times last year to boost growth since the manufacturing component has been shrinking for the past 4 months, according to the ISM’s Manufacturing survey. 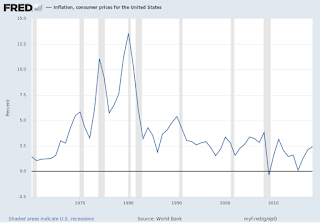 We are skating on thin ice, economically speaking. There were dangerous signals in 2018 when the Fed was raising interest rates to slow down what it saw as incipient inflation and had to reverse course. The stock market plunged, because money was no longer cheap, and it raised fears of such a oncoming recession.

So the unique combination of low rates plus low inflation has kept the U.S. growing in the 11th year of this recovery from the Great Recession, which is the longest post—World War II recovery on record.

But past history has shown low inflation and interest rates cannot last forever. In fact, as the above FRED CPI retail inflation graph shows, the Federal Reserve has been more than proactive on keeping inflation at the 2-2.5 percent range since 1980, when it reached 12.5 percent because of soaring oil prices in the 1970s

Anyone remember the Arab oil embargo and long lines at gas stations when OPEC cut off oil supplies to the U.S.?  The result was back-to-back recessions in 1981-82, and another recession in 1991 during the Desert Storm invasion of Kuwait, and just before the 9/11 Trade Center bombings.

The question may not be skyrocketing oil prices now, since the U.S. in now domestically producing more than 7 million barrels per day. But economic growth is already slowing with the tariff wars that have cut foreign trading by almost 25 percent, the UK’s Brexit battle, and now a possible Middle East war. Iran has many ways to create more trouble.

Then why has the U.S. been killing Iran’s leading general and Iraqi militia commanders in the recent drone attacks? Reuters is reporting that Iran-backed militias had already been planning attacks on U.S. installations and civilians with advanced weaponry brought in from Iran.

Whether such intelligence is true or not, a new Middle East war may have already begun.