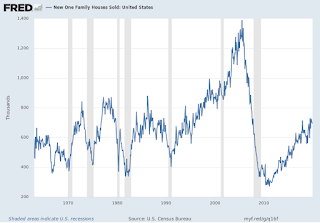 The just-released single-family sales graph highlights a very important fact. New-home sales—especially for single-family residences—are back to historical levels last seen in 2000. The Great Recession and oversupply during the housing bubble caused so much damage to home building that it has taken housing 10 years to recover.

This augers well for economic growth this year with a fully-employed economy and more younger homebuyers entering he housing market. So the question being asked is, has the home-ownership rate finally bottomed, so that it is now again on an upward trend?

Sales of new single-family homes in December were at an annual rate of 694,000, which is 23 percent above the December 2018 rate, reports HUD and the U.S. Census Bureau. Builders are finally catching up to the demand for more homes, in other words.

There are many reasons the housing recovery has taken so long—there are too few homes in the affordable range, for starters. Entry-level homebuyers (usually from the millennial generation) have been slow to form new households and pay down their college debts, so they are currently buying just 30-31 percent of existing homes, when their percentage has been closer to 40 percent in the past.

Builder confidence in the market for newly-built single-family homes has also increased five points to 76 in December off an upwardly revised November reading, according to the latest National Association of Home Builders/Wells Fargo Housing Market Index (HMI). This is the highest reading since June of 1999.


“Builders are continuing to see the housing rebound that began in the spring,” said the NAHB, “supported by a low supply of existing homes, low mortgage rates and a strong labor market. While we are seeing near-term positive market conditions with a 50-year low for the unemployment rate and increased wage growth, we are still underbuilding due to supply-side constraints like labor and land availability. Higher development costs are hurting affordability and dampening more robust construction growth.”

The average rate of new home sales in 2019 was 681,000, which was 10.3 percent higher than 2018’s pace. The median sales price for new homes was $331,400 in December, which was up from the previous month. The government estimated there was a 5.7-month supply of new homes available for sale, up slightly from November as well, and is now back to the average supply of new homes on the market before the housing bubble. 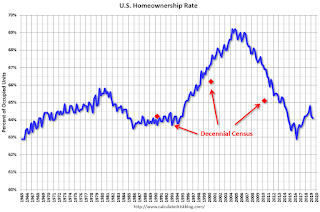 Calculated Risk’s Bill McBride has commented on the homeownership rate since the Great Recession, and believes it is also returning to historical levels, per his graph. It is back to 64.1 percent of households, about the average that has prevailed since the 1970s.

There is still a housing shortage, however, with more than 500,000 homeless living on the streets, according to the latest data. This is a sign that not enough affordable, entry-level homes are being built; which means that many of the younger generations will still not be able to afford to buy.