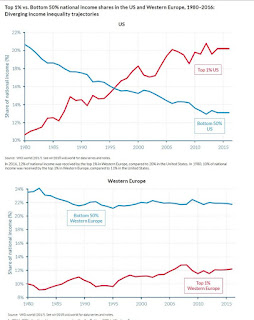 This New Year is a good time to talk about our record income inequality, in the hope that it can be improved. Because it’s the reason a minority of white male Republicans have been able to hold onto their power for so long.

U.S. income inequality is the worst since 1929, which is why it was a main cause of both the Great Depression and Great Recession. The majority of Americans held a minority of the wealth, but were the biggest spenders. So when they ran out of the means to spend, the economies crashed.

The above graphs portray the real message of such income inequality. The top 1 percent of U.S. income earners have doubled their share of national income since 1980, whereas the national income share of the 1 percent in Western Europe has held steady at just 10 percent. In other words, there has been a massive transfer of Americans’ wealth to the one percent since 1980.

The result has been disastrous for our participatory democracy. It has created a country of Haves and Have-nots, where the Have-nots live in the poorest red states dominated by Republican legislatures that haven’t raised the current minimum wage above the federal rate of 7.25 percent, and Haves in the more prosperous blue states with Democratic Party-majority governments that have. 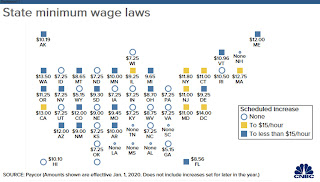 The federal minimum wage was last raised in 2009 to $7.25 per hour. Seven states and Washington D.C. are raising their minimum wage to $15 per hour and nearly 7 million wage earners will be getting their minimum pay raised January 1, according to CNBC and the Economic Policy Institute (EPI), a labor think-tank.

The CNBC graph shows those states with pending increases to $15 per hour. That comes to $2,580 per month with a 40-hour week and just $30,960 annually; barely enough for a single person to live, but not families.

That is how much conservatives (and the NFIB small business lobby) have succeeded in blocking any raise to the national minimum wage since 2009.

Recent research by Nolan McCarty, a professor at Princeton University suggests why. McCarty, working with political scientist Boris Shor and economist John Voorheis, has released a new study that shows that the growing ideological gap between the Republican and Democratic parties — a common obstacle to getting anything done in Washington — is not just due to politicians' incompetence or their unwillingness to work together. It's due, at least in part, to the widening gap between the rich and poor.

The red states have been hit hardest by the loss of industrial jobs, and conservatives have fanned the flames of political polarization by scapegoating immigrants (especially the dark-skinned), while blaming Washington’s political ‘swamp’, and big city folk in general for their suffering that has skyrocketed rates of suicide and opioid use.

The federal minimum wage has no inflating indexing, which is why it is worth so much less today; whereas it is indexed with some state minimum wage laws, and eighteen states have upcoming minimum wage increases that are also indexed to inflation. But at least 12 red states have not slated increases. It is one reason they are among the poorest states while voting for President Trump in 2016.

There is an even greater danger looming due to the record income inequality. It is to the U.S. Constitution. For the current Republican Party has become the party of oligarchs, the supremely rich, which is why they can deny the reality of the suffering of their red state supporters, the voting rights of minorities, and constitutional laws that protect us from foreign intervention in elections.

It is incredible that the oligarchs have managed to convince their red state constituents they are not the cause of so much suffering when they were the first to advance a free trade agenda, thus allowing many of those higher-paying manufacturing jobs to flee the U.S..

This is also why they almost totally support a sociopath in the White House with no regard for the truth or laws that support a democracy. They prefer to live by the only law they heed—the law of the jungle in a Darwinian survival of the strongest exploiting the weakest for their own personal gain.