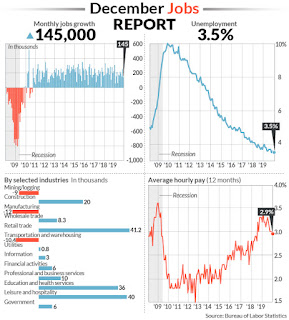 This MarketWatch graph gives an instant picture of December payroll formation. The consumer-driven service sector is booming with more than 154,000 nonfarm payroll jobs created in December, but 19,000 jobs were lost in the Mining and Manufacturing sectors. Average hourly pay growth is slowing as well.

This is worrisome in the sense that plenty of lower-paying jobs are being created in Construction, Retail and Wholesale Trade, Transportation, Professional Services, Education/Health, and Leisure activities; hence the record low unemployment rate; but higher-paying job losses for blue collar workers (-19,000) brought the net job gains down to 145,000.


The Labor Department also reported, “In 2019, payroll employment growth totaled 2.1 million, compared with a gain of 2.7 million in 2018. Incorporating revisions for October and November, which decreased payrolls by 14,000, monthly job gains averaged 184,000 over the past 3 months.”

MarketWatch’s Jeffry Bartash conjectured that skilled workers are so hard to find that companies are afraid to layoff anyone in case the economy does speed up. Hence the job growth is in services, rather than manufactured things made by those blue collar workers.

We now have to look for signs that a signed Phase I tariff agreement with China can keep this economy growing. Estimates for Q4 GDP economic growth are still hovering around just one percent, because companies are not investing in capital investments for future growth. And so manufactured exports that were supposed to expand due to the various trade agreements are also declining. 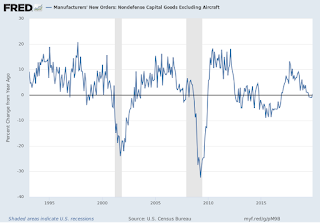 In fact, this St Louis Federal Reserve-generated graph since 1994 for nondefense capital orders of manufacturing goods excluding aircraft shows that so-called capex expenditure growth was 10 percent during boom periods (Gray bars portray 2001 and 2007-09 recessions). But such investments are currently contracting at 1 percent, not a good sign for future growth.

The growth rate was last at 10 percent from 2010-12 due to a boost in government spending that brought us out of the Great Recession, but Tea Party-led Republicans then decreed spending caps and even a 2013 government shutdown that has limited public investments since then.

Private sector corporations would rather use their record profits from the Great Recession recovery to buy back stock and enhance CEO salaries, as I have been saying, so there has been little investment in public works—like infrastructure, education, the environment, and Research & Development, all spending that would restore our flagging labor productivity.  Hence annual economic growth has slowed to the current crawl of 2 percent since then.

And Iraq is now asking U.S. soldiers to leave Iraq because the U.S. Iraqi Prime Minister Adel Abdul-Mahdi in a late Thursday night phone call to Secretary of State Mike Pompeo also said, “American forces had entered Iraq and drones are flying in its airspace without permission from Iraqi authorities, and this was a violation of the bilateral agreements.”

War is a great distracter from real problems that only better economic growth can solve. How can such hostile behavior help to keep any economy growing, much less ours? That is the question yet to be answered.