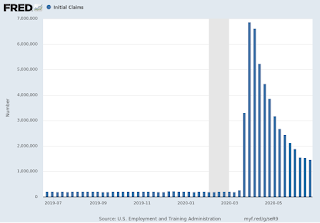 The U.S. economy is recovering very slowly, in part because the number filing for first-time unemployment benefits is still too high (see above graph). Why? Businesses are now shedding workers because the COVID-19 pandemic is not under control in the U.S. Total infections are now surpassing April highs, which means some states will have to slow down their re-openings as well as the rehiring of workers.

CDC and NIH experts Drs. Redfield and Fauci testified Tuesday to congress that COVID-19 is surging rather than fading, as President Trump has asserted in recent speeches. In fact, Dr. Fauci said they won’t even have reliable diagnostic tests that will tell them how patients are infected until this fall.

Dr. Fauci said the U.S. is still in the middle of the first wave and the imperative is to “get this outbreak under control over the next couple of months," in his testimony.


The world’s leading international economic institutions – the International Monetary Fund, the OECD, and the World Bank – now warn that it may take at least two years for the global economy to regain what has been lost to COVID-19. If the major economies face additional waves of infections, recovery would take even longer.”

According to World Bank forecasts, the global economy will shrink by 5.2 percent this year. That would represent the deepest recession since the Second World War, with the largest fraction of economies experiencing declines in per capita output since 1870, the World Bank says in its June 2020 Global Economic Prospects.

This in fact mirrors what happened after the world’s last worst pandemic—the 1918-20 Spanish flu outbreak from which the U.S. economy didn’t recover until 1922.

And growth in the developed countries will be worse where the pandemic has been the most severe and where there is heavy reliance on global trade, tourism, commodity exports, and external financing, says the World Bank.

Guess which country has the worst death toll and infection rates? It is the U.S., which means U.S. GDP growth in predicted to shrink by 5-6 percent this year say all three of the international economic institutions El-Erian highlighted.

And WHO also warned of a new and dangerous phase of the pandemic. Eighty-one nations have seen a growth in new cases over the past two weeks. Only 36 have seen declines.


“Many people are understandably fed up with being at home,” Dr. Tedros Adhanom Ghebreyesus, director general of the WHO, said in a news conference in which he described the new phase of the virus. “Countries are understandably eager to open up their societies and their economies. But the virus is still spreading fast. It is still deadly and most people are still susceptible.”

We said last week that many employers, the including auto and airline sectors, had been hiring back their employees over the past month, hence a surprise jump in employment with the 2.5 million jobs increase in May.

Now both consumer sentiment and retail sales are beginning to recover, but only in those states and counties that listen to the experts, which means this recovery will be uneven at best.