Recession Has Arrived, No Big Surprise!

The Dow plunged 1,862 points on Thursday, as the Business Cycle Dating Committee of the National Bureau of Economic Research, which maintains a chronology of the peaks and troughs in economic activity in the United States, had just determined that a peak in monthly US economic activity occurred in February 2020.


The NBER press release said, “…The peak marks the end of the expansion that began in June 2009 and the beginning of a recession. The expansion lasted 128 months, the longest in the history of U.S. business cycles dating back to 1854. The previous record was held by the business expansion that lasted for 120 months from March 1991 to March 2001.”

And Fed Chairman Jerome Powell gave some further bad news. The Federal Reserve on Wednesday slashed its estimate for U.S. gross domestic product this year to -6.5 percent, yes minus 6.5 percent, when many economists were predicting a return to growth by the end of the year. It also raised its median forecast for 2020 unemployment to 9.3 percent.

Powell and the Fed Governors are saying we could have several years of very slow growth. This is exactly what happened from the 1918-20 Spanish flu pandemic, the only real historical comparison. That recession lasted from 1920-22 before growth resumed and became what is known as the “Roaring Twenties”, as I’ve said. 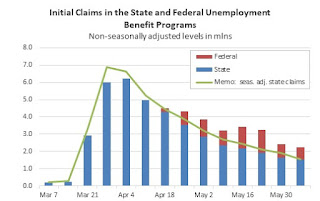 However, just reported initial claims for unemployment was better news as it is continuing to decline per the above graph. It fell to 355K to 1.542 million in the week of June 6 in seasonally adjusted terms, another sign that the work shutdown is ending, which could shorten the recession.


Reuters ICAP news says “Our guess is that employment will rise again on a net basis in June as more workers are called back from temporary layoffs, but at the same time there continues to be a heavy flow of new job losses as the corporate sector re-evaluates the post-pandemic outlook.” 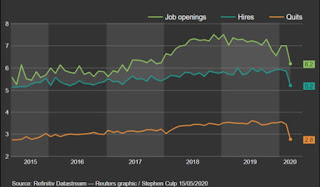 And lastly, we have the just released the JOLTS report (Job Openings and Labor Turnover Survey - above graph) that counts the number of hires and layoffs each month confirming that hiring tumbled 1.6 million to a record low 3.5 million in April. Job openings declined 965,000 to 5.0 million on the last business day of April, the lowest since December 2014 when six to seven million job openings had been the norm for the past several years.

How do we make sense of all this news? Firstly, ignore the stock market for now as worthy of any prediction of future prosperity. It’s attempting to parse discounted earnings at least six months from now. And who knows what earnings will be even in one year?

Also, if a vaccine in developed by the end of this year or early next year, as Dr. Fauci keeps hoping, how will it be distributed to most of the earth’s now 8 billion in population? Because no one will be safe until we all are safe, if we want to resume normal economic activity, which has no borders.

So I am maintaining it will be at least two years before consumers or producers return to what would be normal activity.  BTW, what will be the ‘new normal’ everyone is talking about when people can safely gather again in large shopping mall or stadium crowds, for instance? The health care experts are saying mask wearing and social-distancing must be part of it.