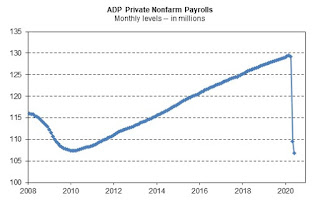 Private sector employment decreased by - 2,760,000 jobs from April to May according to the May ADP National Employment Report®, much less than the original estimate of –8 million jobs. It precedes Friday’s official government unemployment report for May.

Should we be thankful it wasn’t worse when the U.S. recovery from COVID-19 has been more damaging than in most other developed countries?

We weren’t prepared, in other words, and with the George Floyd killing and protests, there will be even more chaos as angry protestors precipitate higher COVID-19 infection rates and shut down businesses that are just opening.

It didn’t have to be this way. President Obama had set up a commission to study police violence and policing policies, but the Trump administration abolished it as they abolished the National Security Council commission that advised the White House on how to prepare US for pandemics.

Nothing was done to prepare Americans for either of the long predicted events, in other words. It was more important for President Trump to want to abolish President Obama’s accomplishments, rather than build on them.

Such is the cost of one political party’s single-minded focus on maintaining power and what amounts to an apartheid policy—discriminating against darker-skinned people, including immigrants—that Republicans risk taking down American democracy itself.


“Every day, it seems, brings another indicator of our decline: the can-do nation has become a land that can’t deal with a pandemic, the leader of the free world has become a destroyer of international institutions, the birthplace of modern democracy is ruled by would-be authoritarians. How can everything be going so wrong, so fast?”

“Well, we know the answer,” he said. “As Joe Biden put it, “the original sin of slavery stains our country today.”

What have most other developed countries done to control COVID-19? They were prepared. Australian Prime Minister Scott Morrison, a staunch conservative, listened to the scientists that predicted the oncoming pandemic early.


According to the NYTimes,“Scientists, whom Mr. Morrison’s party has derided for over a decade, were respectfully asked for their views about the novel coronavirus and, more remarkable still, these views were acted on and amplified. Mr. Morrison dismissed the idea of trying to build herd immunity among the population, calling it a “death sentence.”

Angela Merkel, Germany’s Prime Minister had a scientific background as a former research scientist with a doctorate in quantum chemistry who once co-authored a paper on the “influence of spatial correlations on the rate of chemical reactions”, according to the Guardian.
She was able to explain why abandoning the lockdown early was so dangerous to Germans, as did New York Governor Andrew Cuomo at his daily briefings.

Why would Republicans discount science and scientists such as Dr. Fauci, director of the Institute of Allergies and Infectious Diseases, and demote Dr, Rick Bright, former director of the Biomedical Advanced Research and Development Authority (BARDA) at HHS?

It’s very sad to see one of our two political parties be so oblivious to what has happened and is about to happen.

Prime Minister Morrison, as much an ideological opportunist as Trump, was smart enough to listen to his scientists. “That’s the advice we have taken.” Mr. Morrison went so far as to declare: “Today is not about ideologies. We checked those at the door.”

But I see hope.  The Republicans’ modern history of denigrating anything scientific that doesn’t preserve the status quo or forward their ideological agenda to maintain power is their vain attempt to defeat Mother Nature, and it won’t work.