Why the Housing Shortage? 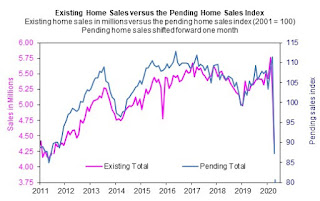 We are now beginning to feel the recession in housing caused by the Coronavirus pandemic. What can we say with so many living on the edge because of the loss, or temporary hiatus, of their jobs? There’s still a housing shortage, for starters.

Some homeowners are falling behind on their mortgage payments.The majority are protected from default proceedings for at least one year, if their mortgages were guaranteed by any of the government-guaranteed GSEs like Fannie, Freddie, FHA, and VA. So no one is expecting defaults to raise the number of homes available for sale.

Forbes Magazine reported on a January NAR survey that America’s housing shortage is long lasting. According to their analysis, the market needs a whopping 3.8 million additional new homes to fully meet consumer demand.


“Since 2012, nearly 10 million new households were formed in the U.S. Only 5.92 million single-family homes were built in that same period, leaving what Javier Vivas, Realtor.com’s director of economic research, calls “a nearly insatiable appetite from potential buyers, especially in the lower end of the market.”

Why? Builders were so badly burned by the housing bubble and Great Recession and lack of entry-level homebuyers that suffered most from the Great Recession that they haven’t really begun to catch up to demand.

The recovery in home sales and construction is now largely dependent on how many jobs remain after the pandemic, which in part depends on whether the Senate agrees to more financial aid to state and local governments that employ most of the “essential” workers taking care of our health and safety.


NAR’s chief economist Lawrence Yun is surprisingly optimistic about the housing market. “Given the surprising resiliency of the housing market in the midst of the pandemic, the outlook for the remainder of the year has been upgraded for both home sales and prices, with home sales to decline by only 11 percent in 2020 with the median home price projected to increase by 4%,” Yun said. “In the prior forecast, sales were expected to fall by 15 percent and there was no increase in home price.”

Why does he know this? Mortgage application volumes have been picking up in spite of the stay-in-home orders. Home owners and buyers have been been taking advantage of the still record-low interest rates to improve their overhead costs.


"The housing market is continuing its path to recovery as various states reopen, leading to more buyers resuming their home search. Purchase applications increased 9 percent last week - the sixth consecutive weekly increase and a jump of 54 percent since early April. Additionally, the purchase loan amount has increased steadily in recent weeks and is now at its highest level since mid-March," said Joel Kan, MBA's Associate Vice President of Economic and Industry Forecasting.

Both pending home sales and existing-home sales are falling during the pandemic, but maybe not for long given the need for more housing..

The Pending Home Sales Index (PHSI),* www.nar.realtor/pending-home-sales, a forward-looking indicator of home sales based on contract signings, fell 21.8 percent to 69.0 in April. Year-over-year, contract signings shrank 33.8 percent. An index of 100 is equal to the level of contract activity in 2001, according to the National Association of Realtors (NAR).

More surprising was that housing prices are still rising, signaling there is still a strong demand because we still have that housing shortage in many markets. The median existing-home price for all housing types in April was $286,800, up 7.4 percent from April 2019 ($267,000), as prices increased in every region. April’s national price increase marks 98 straight months of year-over-year gains.

We also know that existing-home inventories are historically low. Total homes for sale at the end of April totaled 1.47 million units, down 1.3 percent from March, and down 19.7 percent from one year ago (1.83 million). Unsold inventory sits at a 4.1-month supply at the current sales pace, up from 3.4-months in March and down from the 4.2-month figure recorded in April 2019, when 6 months is the historical norm.

How many will lose their homes before this recession ends? That is the $64 question. Housing is being remarkably resilient with so many uncertainties. The majority of home owners or whannabe owners are in the top 10-20 percent income brackets not as affected by the pandemic.

Alas, it has be be because lower-income households that have suffered the most from this pandemic are mostly renters not in any position to own a home. That’s a problem politicians are not yet willing to face, but beware what the “I cannot breathe...” rioters are telling them.