Back to a 'V' Shaped Recovery? 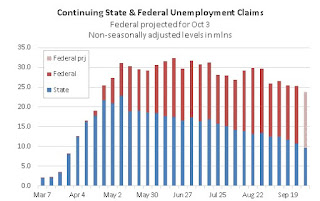 Richard Clarida, No.2 official at the Federal Reserve said on Wednesday that the U.S. recession begun in March with the coronavirus pandemic may already be over.

“This recession was by far the deepest one in postwar history but it also may go into the record books as the briefest recession in U.S. history,” Clarida said in prepared remarks to an Institute for International Finance conference. The flow of economic data since May has been “surprisingly strong,” he said.

Why? There is much pent up consumer demand with a record personal savings rate double (approximately 14 percent) what it was pre-pandemic because of the March to June business shutdown when they couldn’t spend on anything but essentials.

Meanwhile, initial jobless claims remained worryingly high in the week of October 10.  The seasonally adjusted level of state claims rebounded by 53K to 898K, which is the highest reading since the first half of August, said Reuters’ Wrightson/ICAP data service.  In not seasonally adjusted terms, claims were up 76K, with the increase spread across a range of states:  Indiana was up 19K, Illinois and Massachusetts were each up 10K, Georgia was up 8K, for instance.

The pace of new layoffs continues to be a source of concern.  “We continue to think it is an open question whether there will be enough new hires and worker call-backs in October to offset the ongoing job losses,” said ICAP.  “The string of positive payroll gains could be interrupted this month.” 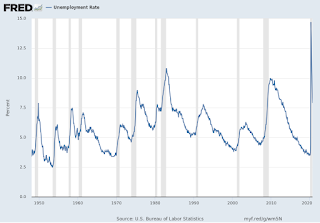 In the continuing claims data, workers continued to fall off the state rolls in the week of October 3 as they exhausted their regular benefits.  The number of beneficiaries slid 1.2 million in seasonally adjusted terms to a level of 10.0 million still collecting some form of unemployment benefits.

Economists’ consensus is that the economy should rebound at a 31.9 percent annualized rate in the July-September quarter. The economy sank at a record minus -31.4 percent rate in the second quarter.

The Fed vice chairman was not all upbeat though. He said the outlook for the economy was unusually uncertain and depends on the course of the virus. It will take time for the economy to recover all the lost ground in the recession and he said more help from Fed policy and Congressional spending “will be needed.”

I believe a full recovery in the consumer-dependent service sector probably won’t happen until next summer, at least, once a reliable vaccine is developed and widely distributed.

Posted by Popular Economics Weekly at 6:48 AM