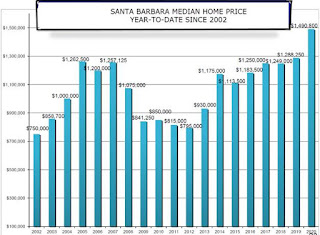 Booming Realtors’ existing-home sales are showing there is a very severe housing shortage with record sales and a record low housing inventory. Santa Barbara Realtor Jim Witmer said the demand for Santa Barbara homes is huge and inventory is being held back by seller’s concerns about the virus.  Buyers are making decisions based on spending more time at home, with work space and more amenities.

“This trend continues as more people relocate to the safety and lifestyle offered by Santa Barbara.  This should continue to drive our values up.  The supply is limited and it is a good time to be a seller,” said Witmer.

Inventory levels are at record lows, with just 228 homes listed for sale in the MLS in September, down 22 percent from January.

The NAR reports that housing affordability declined in August compared to a year ago, despite median incomes rising. However, the jump in home prices—up 11.7 percent—was way above family income increases of 2.2 percent. August 2019).

"Home sales continue to amaze, and there are plenty of buyers in the pipeline ready to enter the market," said Lawrence Yun, NAR’s chief economist. "Further gains in sales are likely for the remainder of the year, with mortgage rates hovering around 3% and with continued job recovery." 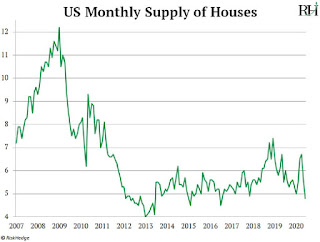 Total housing inventory at the end of August totaled 1.49 million units, down 0.7 percent from July and down 18.6 percent from one year ago (1.83 million). Unsold inventory sits at a 3.0-month supply at the current sales pace, down from 3.1 months in July and down from the 4.0-month figure recorded in August 2019.

Scarce inventory has been problematic for the past few years, according to Yun, an issue he says has worsened in the past month due to the dramatic surge in lumber prices and the dearth of lumber resulting from California wildfires.

Mortgage rates are helping to offset some of those high home prices, however. A 30-year fixed-rate mortgage dropped to 3 percent in August and has averaged below 3% in the past few weeks, the lowest on record.

The NAR also reports pending home sales for contracts closing in two months are also surging, which will boost sales through the end of the year. Pending home sales in August continued to move upward, marking four uninterrupted months of positive contract activity. Each of the four major regions experienced growth in month-over-month and year-over-year pending home sales transactions.

The sale pendings reported by Santa Barbara MLS are again much higher than the previous year (50 percent), so we can expect October to also be a big month for sales, said Witmer.