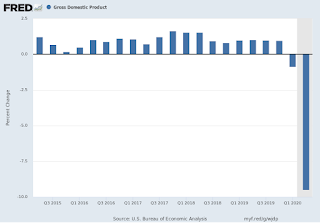 The last estimate of Q2 GDP was barely changed, contracting at -31.4 percent vs. -31.7 percent in the second estimate, but that isn’t dampening the stock market, as it looks like the upcoming first estimate of third quarter GDP growth will be positive, maybe ending the pandemic-induced recession.

Tomorrow’s ‘official’ Labor Department unemployment report should tell us more about third quarter growth, with the first Q3 estimate coming out at the end of October..

Why the consumers’ optimism, just as Covid-19 infection rates are beginning to rise again? Americans’ spending rose 1 percent in August for the fourth month in a row, stemming largely from the massive infusion of federal aid for the unemployed, and the reopening of more businesses. But the increase was the smallest since the U.S. reopened and pointed to a slower economic recovery.

Incomes had declined by 2.7 percent because of the end of government aid in July, the biggest drop since early in the pandemic, but spending is still positive due to accumulated savings from the lockdowns. The personal savings of 14.1 percent is still almost twice as high as it was before the pandemic.

And ADP reported on Wednesday that 749,000 private nonfarm payroll jobs were created in September, with most of the jobs in midsize (259k) and large (297k) companies. It is probably a sign that Friday’s Labor Department unemployment report will show at least 1 million new private payroll jobs being created as well.

Another positive growth sign was that initial jobless claims filed through state programs dropped to 837,000 in the week ended Sept. 26 from a revised 873,000 in the prior week, the Labor Department said Thursday.

And an estimated 650,120 people also filed new claims under the Pandemic Unemployment Assistance Act, the federal law that temporarily made self-employed workers eligible for benefits for the first time ever. That put the number of actual or unadjusted new claims at 1.49 million.

So more workers are returning to their workplace, but the question will still be whether the continuing job creation trend remains positive, given that the fall and winter pandemic/flu season is just beginning.