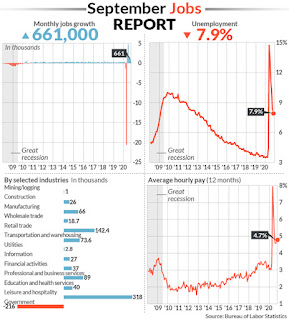 The economy regained 661,000 jobs in September and the unemployment rate fell for the fifth month in a row to 7.9 percent, the government said Friday. It's the smallest advance since a recovery began in May, with August revised upward to 1.49 million new payroll jobs. Private-sector payrolls rose by a stronger 877,000. A-219,000 decline in government employment reduced the overall number, mainly in state and local education.

Bars and restaurants added the most jobs in September (200,000), followed by retail, health care and white-collar businesses. Workers also put in more hours on the job, another good sign for the labor market. So far the U.S. has recovered about 11.4 million jobs since a recovery got underway in May. The economy had shed about 23 million jobs at the height of the pandemic.

We have to worry about the upcoming fall and winter COVID seasons, however, to know if employment and economic growth will continue. Consumers are more optimistic about their future with the Conference Board’s consumer confidence survey also showing increased optimism. 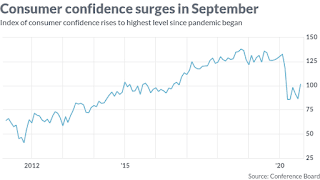 “Consumer Confidence increased sharply in September, after back-to-back monthly declines, but remains below pre-pandemic levels,” said Lynn Franco, Senior Director of Economic Indicators at The Conference Board. “A more favorable view of current business and labor market conditions, coupled with renewed optimism about the short-term outlook, helped spur this month’s rebound in confidence. Consumers also expressed greater optimism about their short-term financial prospects, which may help keep spending from slowing further in the months ahead.”

Consumer spending also increased 1 percent, a good number, but before the latest announced layoffs by airlines and other large employers. This is happening in part because congress can’t agree on another relief package, though the Democrat-led House just passed a $2.2 trillion aid bill. No word yet on what the Republican-led Senate is doing, however.

The NY Times reports that Disney, Allstate Insurance and several airlines have announced some 60,000 job cuts or furloughs with more to follow if congress can’t get its act together on more aid.

The last estimate of Q2 GDP was barely changed, contracting at -31.4 percent vs. -31.7 percent in the second estimate, and it looks like the upcoming first estimate of third quarter GDP growth will be positive, maybe ending the pandemic-induced recession, as I said yesterday.

The employment numbers do not look to be trending in the right direction, especially with the -2.7 percent decline in personal income reported by the Commerce Department for August that is due to the ending of the $600 percent week unemployment stipend in July.

Consumer spending is two-thirds of economic activity these days, so I see further headwinds ahead as we navigate the COVID-19 pandemic.

Posted by Popular Economics Weekly at 8:14 AM