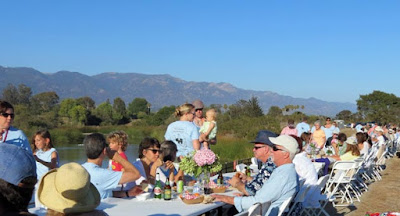 I recently attended the 10th anniversary of the Goleta Dam Dinner held at Lake Los Carneros, on a dam built long before the City of Goleta, California was formed.

Here in this relatively new and still small city, founded in 2002 and nestled beside its famous neighbor, Santa Barbara, were families of all ages and stages happily celebrating not only their sense of community spirit, but the natural beauty of its surroundings that is a unique blend of mountains and ocean located on the central California coast.

This made me realize how successful was the formation of this new, very livable, California city, where I had been privileged to live and help establish, in spite of the many obstacles to the formation of new governmental entities in recent years.

It was a successful community because of the attention paid to both the environment and safety concerns of its citizens—especially the children.

I know Goleta won’t make the list of The Economist Intelligence Unit’s annual Global Liveability Index that really only pays attention to larger cities, where we don’t see this community spirit and camaraderie.

Vienna was the top city on The Economists’ list, with Australia and Canada each having three cities in its top 10 listing of the better-known cities that made The Economists’ Liveability Index. .
No U.S. city was in the top 20, with Honolulu ranking highest at No. 22. Atlanta came in 33rd place; Pittsburgh, 34th; and Seattle, 36th. New York was all the way down in the 58th spot, in part because of low scores for infrastructure, stability and possible crime issues.

That could be because it’s easier for the residents of smaller cities to confront city councils with their concerns—at least in the U.S. of A. It has to be why the City of Goleta became one of the 50 safest American cities in 2017, fifteen years after its formation, according to a survey by Safewise, a security firm.

What then does “liveability” mean? The Economist is a UK Magazine, which might serve as a bias for a more European civic viewpoint, perhaps. But the issue of safety is certainly at the forefront of making any community livable—especially for children.

And now even more so when U.S. Surgeon General Vivek Murthy was fired by President Trump in 2017 after he spoke against gun violence, calling it a public health issue that needs public investment, and stood in support of the victims in Orlando, Florida, where one of the worst mass shootings in American history had just occurred.

It also has much to do with so-called Smart Urban Planning. Architect Suzanne Lennard, and Psychiatrist Henry L. Lennard have written extensively on what makes communities livable in books such as The Forgotten Child (2000, Gondolier Press, Carmel, CA).


Children are safest where there are neighborhood adults with ‘eyes on the streets’ that watch over them, as in many densely-packed European cities with their public squares. Children are also safer where streets are designed and neighborhoods zoned to allow children to roam and explore, rather than be dependent on the auto to transport them to school, for instance, as is the case in many poorly-planned American suburbs.

Such concerns were incorporated into the City of Goleta—that made it such a close-knit, ‘liveable’ community, in my opinion. It was also why attending the Goleta Dam Dinner’s 10th anniversary was such a special event.