It looks like home sales are are defying expectations of an economic slowdown, as both existing and pending home sales are rising. Pending sales measure contracts scheduled to close in 30-60 days, which is a sign that home sales should continue to rise for the rest of this year. 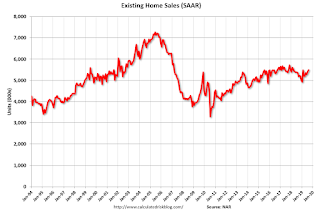 Total existing-home sales, completed transactions that include single-family homes, townhomes, condominiums and co-ops, rose 1.3 percent from July to a seasonally adjusted annual rate of 5.49 million in August. Overall sales are up 2.6 percent from a year ago (5.35 million in August 2018), said the NAR.

It is the second consecutive monthly increase, which is unusual this late in the selling year.  Since housing is usually a leading indicator of economic trends, this could be a good sign for continued economic growth.


Lawrence Yun, NAR’s chief economist, attributed the increase in sales to falling mortgage rates. “As expected, buyers are finding it hard to resist the current rates,” he said. “The desire to take advantage of these promising conditions is leading more buyers to the market.”


“Sales are up, but inventory numbers remain low and are thereby pushing up home prices,” said Yun. “Homebuilders need to ramp up new housing, as the failure to increase construction will put home prices in danger of increasing at a faster pace than income.”

Builders seem to be answering his call, as privately‐owned housing starts in August were at a seasonally adjusted annual rate of 1,364,000. This is 12.3 percent above the revised July estimate of 1,215,000 and is 6.6 percent above the August 2018 rate of 1,279,000 for the strongest residential construction activity in 12 years. 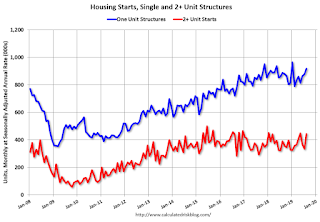 The report from the Commerce Department on Wednesday also showed permits for future home construction rose to levels last seen in 2007. It added to upbeat data on retail sales that have pointed to an economy that is continuing to grow moderately rather than flirting with a recession as has been flagged by financial markets, said Reuters.

There is still strong demand for new housing, in other words. Builder confidence in the market for newly-built single-family homes rose one point to 68 in September from an upwardly revised August reading of 67, according to the latest National Association of Home Builders/Wells Fargo Housing Market Index (HMI) released on Tuesday. Sentiment levels have held in the mid- to upper 60s since May and September’s reading matches the highest level since last October.


“Solid household formations and attractive mortgage rates are contributing to a positive builder outlook,” said National Association of Home Builders’ (NAHB) Chief Economist Robert Dietz. “However, builders are expressing growing concerns regarding uncertainty stemming from the trade dispute with China. NAHB’s Home Building Geography Index indicates that the slowdown in the manufacturing sector is holding back home construction in some parts of the nation, although there is growth in rural and exurban areas.”

And we mustn’t forget mortgage rates have remained low, with 30-year conforming fixed rates still as low as 3.25 percent, and super-conforming fixed @ 3.375 percent for a one-point origination fee in California. However, there are hints that such rates may begin to rise with the Treasury bond rally slowing. The yield of 10-year benchmark Treasury bonds has increased 30 basis points in just one week.

In fact, the demand for housings still exceeds supply some 10 years after the housing bubble bust, with existing-home inventories back down to a 4-month supply; which is a sign the housing market hasn’t fully recovered from the ensuing Great Recession.

The Fed lowered its Fed Funds rate another 0.25 percent, which dropped the Prime Rate to 4.75 percent. This will encourage consumers to continue spending, in other words, with slightly reduced confidence in future growth and jobs. So it seems smart to buy a home while interest rates remain low and consumer remain confident into the holidays.