In the face of declining consumer confidence, but strong consumer and government spending, the third estimate of second quarter GDP growth was unchanged at 2 percent.


The BEA reported the increase in real GDP in the second quarter reflected positive contributions from personal consumption expenditures (PCE), federal government spending, and state and local government spending that were partly offset by negative contributions from private inventory investment, exports, nonresidential fixed investment and residential fixed investment. Imports, which are a subtraction in the calculation of GDP, increased.

The ‘other’ shoe to drop was the Conference Board’s consumer confidence index that fell to a three-month low of 125.1 this month from 134.2 in August. 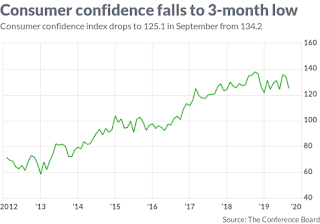 “Consumer confidence declined in September, following a moderate decrease in August,” said Lynn Franco, Senior Director of Economic Indicators at The Conference Board. “Consumers were less positive in their assessment of current conditions and their expectations regarding the short-term outlook also weakened. The escalation in trade and tariff tensions in late August appears to have rattled consumers. However, this pattern of uncertainty and volatility has persisted for much of the year and it appears confidence is plateauing. While confidence could continue hovering around current levels for months to come, at some point this continued uncertainty will begin to diminish consumers’ confidence in the expansion.”

That and other indicators show slowing growth—for instance, consumers are saving more of their incomes. This is one factor holding down inflation that was discussed in earlier columns. Seniors are saving more due to extraordinarily low interest rates on which their fixed incomes are dependent, and perhaps more caution about future growth prospects.

Wholesale inflation has fallen from its high in 2018 as the Trump tax cut stimulus has worn off, though the increase in the core rate of wholesale inflation over the past 12 months rose slightly to 1.9 percent in August from 1.7 percent. Economists prefer core inflation readings because food, gas and trade margins can swing sharply from month to month and mask underlying price trends.

I said last week that six in 10 Americans now say a recession is likely in the next year and as many are concerned about higher prices because of the trade war with China, helping to knock six points off President Donald Trump’s job approval rating in the latest ABC News/Washington Post poll.

This is putting downward pressure on prices, as such fears reduce the demand for goods and services in general. Ratings of the U.S. economy overall, 56 percent positive, are down from 65 percent last fall in this poll, produced for ABC by Langer Research Associates.

Most ominously, 60 percent see a recession as very or somewhat likely in the next year. That’s within sight of the 69 percent who said so in November 2007, one month before the onset of the Great Recession.