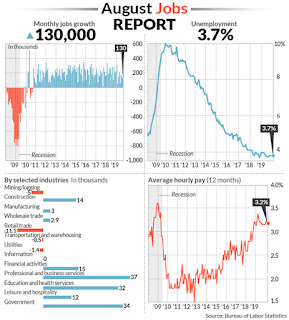 The economy adding just 130,000 new jobs in August, marking the smallest increase in three months and offering more evidence that hiring has slowed amid a broadening trade dispute with China that’s disrupted the U.S. and global economies, is the ‘lede’ story this Friday.

The weak job total is from more than the trade wars.  Though wages and salaries are rising, it’s not as much as in earlier recoveries, when average wages rose closer to 4 percent.  But the Fed has been so proactive in preventing any sign of inflation that it boosted interest rates too soon in December, which slowed both consumer buying and investing that depend on lower short term rates.

This tends to nip any substantial wage increases in the bud that would really jump-start further economic growth into the 11th year of this record-breaking recovery.

The good news is that Friday’s soft employment figures should keep the Federal Reserve on track to cut interest rates later this month, even after another sharp increase in wages.

Longer term interest rates are already plunging and there is speculation that rates might even trend lower, particularly if the Fed continues to lower short term rates. It could boost home sales and prices, as well, if no recession looms due to the other factors (trade war?).

Harvard economics Professor Kenneth Rogoff said recently that it isn’t out of realm of possibility that more Central Banks might introduce negative interest rate yields to prevent another recession as is already the case in the EU and Japan.

Federal Reserve Chairman Jerome Powell said Friday afternoon that the most recent monthly gauge of the U.S. labor market fit into an overall picture of a healthy jobs market and economy.
In a question-and-answer session in Zurich, Powell said the outlook for the economy remains favorable, describing the future as one likely to reflect continued moderate economic expansion.

Then why the downward trend in hiring? Nobel economist Paul Krugman says that Trump’s trade policies are bad for productive business, in particular, which are businesses that must plan for the longer term. That excludes extractive businesses, like oil and coal mining that only think short term; which means until the oil and coal reserves run out.


“Trump’s trade war isn’t just that tariffs raise costs and prices,” said Krugman, “while foreign retaliation is cutting off access to important markets. It is that businesses can’t make plans when policy zigzags in response to the president’s whims.”

The gain in new jobs was even weaker if hiring tied to the upcoming U.S. Census is stripped out. In August, employment in federal government rose, largely reflecting the hiring of temporary workers for the 2020 Census. Private-sector employment was up by 96,000, with notable job gains in health care and financial activities and a job loss in mining.

There are other factors slowing job growth to consider, also. No national infrastructure bill has been passed, when that would be the surest way to jump-start employment in productive businesses. But it means spending government money, and the Trump administration only wants to spend taxpayers’ money on border walls; even attempting to take away some $3.4 billion from the defense budget to do so.

This could just be the beginning of slower job growth, if the trade wars aren’t resolved soon, as I and many others have been saying. But who will resolve them in time to prevent that R word from surfacing, once again?