What Happens When % Rates Go Even Lower? 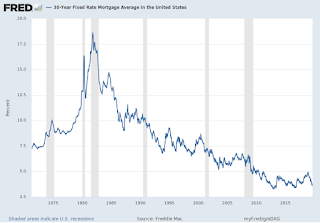 The NAR’s pending home sales index was softer than expected in July, thereby reversing nearly all of its June increase.  That left the index with a slight YOY decline of 0.3 percent.  Those results probably mean at least part of the July rebound in existing home sales will be reversed in August, though any drop in August resales may be milder than the July decline in the pending index, says market observer ICAP, a Reuters subsidiary.

Interest rates are down and they may go even lower, if no recession looms due to other factors (trade war?). Harvard economics Professor Kenneth Rogoff said recently that it isn’t out of realm of possibility that more Central Banks might introduce negative interest rate yields to prevent another recession as is already the case in the EU and Japan.

But lower interest rates also boost the value of housing, increasing the demand for housing because more borrowers become eligible to buy; unless builders are able to increase production. But that isn’t certain with the 25 percent increase in the Canadian lumber tariff, which has increased construction costs $8,000, according to estimates, and the severe construction labor shortage.

The Guardian reports Jyske Bank, Denmark’s third largest, has begun offering borrowers a 10-year deal at -0.5 percent, while another Danish bank, Nordea, says it will begin offering 20-year fixed-rate deals at 0 percent and a 30-year mortgage at 0.5 percent.


There’s also another effect of lower rates. Barron’s economist Matthew Klein states the precipitous drop in interest rates “should have a big impact on refinancing activity. U.S. households owe roughly $9.4 trillion in mortgage debt, and a bit more than half of that takes the form of conventional home loans that conform to standards set by Fannie Mae and Freddie Mac. More than 90 percent of those 30-year mortgages have an interest rate above the current market rate.”

Not all will choose to refinance, of course. Black Knight, a mortgage research firm, calculates about 10 million mortgages would be candidates for refinancing, based on today’s market rate (3.6 percent), interest rates on existing mortgages (at least 4.25 percent), credit score (above 720), and loan-to-value ratios (below 80 percent).

Should market rates drop to 3.4 percent, Klein quotes Black Knight estimates that the number of potential refinancing candidates would jump to 13 million. Mortgage rates of 3 percent, which would represent a sharp decline from current levels, would translate into 20 million refi candidates.

This is now looking like a real possibility. We know what happened the last time there was a precipitous drop in interest rates; the housing bubble. Rates had dropped sharply after the 2001 recession, and then Fed Chair Alan Greenspan labored to keep interest rates too far below existing inflation rates to finance the War on Terror that frittered away 4 years of budget surpluses inherited by GW Bush.

It led to double-digit home price increases for several years, hence the housing bubble; which in turn led to immense overbuilding and the liar-loans pushed by lenders to sell as many homes as possible.

Today the biggest difference is that we don’t have inflation rates of 3-5 percent that existed in the early 2000s, therefore not as much fuel to boost housing prices. Values are currently on the down trend and in the 3 percent range, per the Case-Shiller Index as we speak.


“The economic impact would be noticeable under any of these scenarios,” says Klein. “According to Freddie Mac, households that refinanced in April through June, when mortgage rates averaged 4%, already have saved about $140 each month, or roughly $1,700 a year. For perspective, the typical U.S. homeowner with a mortgage spends $5,000 per year on groceries. Evercore estimates that the average borrower could save about $4,560 annually by refinancing into a new mortgage at 3.5%.”

Lower interest rates could give a big boost to the longest economic recovery on record, putting more money in consumers’ pockets, should the downward interest rate spiral that Professor Rogoff predicts become a reality. It could also create another housing bubble; take your pick!