Start of a New Housing Boom? 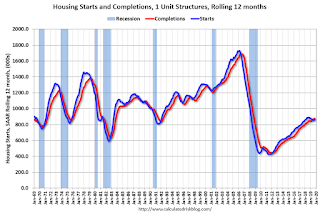 We should be careful in announcing a new housing boom. It can be a two-edged prophesy, since a housing bust followed the last housing boom and precipitated the Great Recession.

But it certainly looks like residential construction is one sector on a tear at present; at the same time as there is a significant housing shortage and housing construction isn’t yet back to historical levels, per the above single-family starts graph.

Housing construction is booming per the latest U.S. Census Bureau report on housing starts and permits, but is far below the peak of some 1.7 million units just prior to the Great Recession.
October starts are at a 1.314 million annual rate, the strongest showing since May last year. Permits are the big positive in today's report, well above expectations at a 1.461 million rate which is the strongest since the subprime housing bubble bust in 2007.

The October 1.31 million starts is the number of housing units builders would begin if they kept this pace for the next 12 months, explained the NAHB in their press release. Within this overall number, single-family starts increased 2.0 percent to 936,000 units. The multifamily sector, which includes apartment buildings and condos, increased 8.6 percent to a 378,000 pace.

“Led by lower mortgage rates, the pace of single-family permits has been increasing since April, and the rate of single-family starts has grown since May,” said NAHB Chief Economist Robert Dietz. “Solid wage growth, healthy employment gains and an increase in household formations are also contributing to the steady rise in home production.”

Three-month averages for the key single-family category confirm the construction and future permits strength. Starts are running at a 923,000 rate on the average which is another 12-year high and up sharply over the last two months. Single-family permits are at an 888,000 rate which is likewise pivoting higher and also the strongest in 12 years.

But longer term, single-family construction has consistently been at or above one million annualized units since the 1970s with a much smaller U.S. population. So there is a lot of catching up from the housing bust and Great Recession. 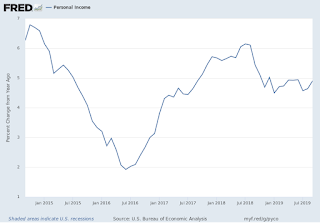 Personal incomes have been consistently lower because most new jobs created today are in the lower-paying service sector, such as warehousing, health care, transportation, and the like, even in our fully-employed economy.

But the prognosis for interest rates is they could even go lower, which should continue the housing ‘boom’, or whatever we end up calling it. EU countries such as Denmark are already offering negative fixed interest rate mortgages, believe it or not. Can that happen here?

It will be the subject for a future column.