The Historical Decline in US Growth 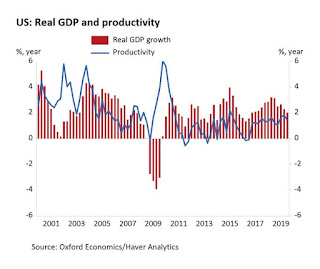 This almost arcane statistic followed by professional economists is one of two major reasons US economic growth has slowed to a crawl, as seen in the graphs. Individual workers are no longer producing as much per worker as they did through 2000, even with a fully employed economy and the introduction of modern technologies that boost production. 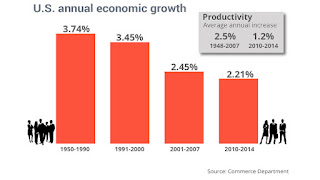 In fact, the national birth rate (12/1,000) still remains higher than the national death rate (8/1,000), which means more people are being born in the U.S. each year than are passing away. Additionally, the arrival of immigrants with larger families, has kept the U.S. population steadily increasing, albeit slowly.

I suggest that lower fertility is just the tip of the melting economic iceberg, because populations also increase with new immigrants. So we shouldn’t be cutting back on immigration quotas as the current administration is doing—to some 700,000 last year from the 1.3-1.4 million per year in recent decades.

And combined policy missteps—such as spending less on capital investments that would increase labor productivity and not introducing policies that would enhance birth rates; also better health care, family leave, more liberal vacation and sick leave policies are a start—as European countries have been doing.

This has kept U.S. GDP growth averaging 2 percent since the Great Recession, but no higher. EU countries have declining birth rates, unfortunately, which has knocked down EU GDP growth rates to around one percent.

But they also have greater longevity and better healthcare outcomes than the U.S., which is ranked 37th in health outcomes by the World Health Organization. As in example, French residents now live an average 4 years longer than Americans, says Nobel economist Paul Krugman in a recent NYTimes Op-ed. “Why? Universal healthcare and policies that mitigate extreme inequality are the most likely explanations.”

There is much more that can be done to boost economic growth and income equality, in other words. Fixing schools would boost educational levels, switching to alternative energy sources would inject $trillions into new technologies and bring down pollution costs, fixing our infrastructure would boost productivity immediately by cutting down on commute times and lost work hours, and better enforcement of environmental regulations would decrease healthcare expenses as well as job losses due to ill health.

The list goes on and on. Maybe we do need a Green New Deal to make all this happen?