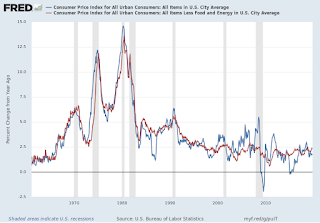 The Consumer Price Index for All Urban Consumers (CPI-U) rose 0.4 percent in October on a seasonally adjusted basis after being unchanged in September, the U.S. Bureau of Labor Statistics reported today. Over the last 12 months, the all items index increased 1.8 percent before seasonal adjustment.

There is still no inflation to worry about, in other words. This is why the Fed hasn’t succeeded in pushing inflation higher to combat deflationary expectations with its interest rate cuts. Prices are barely rising for everything but the daily fluctuations of energy prices—gasoline, in this case.

So don’t look for increasing interest rates anytime soon, even though the 10-year benchmark Treasury yield has topped 1.9 percent, up from its 1.55 percent recent bottom. It's only happened because market investors are selling safe-haven bonds and buying stocks at present, in anticipation of a tariff agreement with China.

But Trump just announced that he hasn’t agreed to reducing or eliminating any tariffs just yet, though they “are close” to a deal.

This tells you just how uncertain are predictions of a phase I tariff reduction agreement. It seems both sides are playing to the press rather than coming up with anything substantial. Why else would talks be dragging on with all the starts and stops along the way? It says to me that nothing substantial will be achieved until after the 2020 election, when China can be more certain which administration they will be dealing with.

There’s also more we can read into today’s inflation data. Fed Chairman Powell just announced no more Fed rate cuts are contemplated at present. This has to be because the Fed is now fearful that record low short term rates have pushed stock prices to record highs, thus causing a potential asset bubble.

And Americans just endured a Great Recession because of a busted housing asset bubble.

We mentioned last week that irrational exuberance seems to be creeping back into the stock market with price-to-earnings ratios above historical norms—usually a sign that stock buyers are counting on stocks continuing to rise; yet corporate profits are declining from their recent highs.


I quoted a Forbes Magazine article thusly: “On a cautionary note related to the earnings skid,” says Forbes, “the S&P 500’s price-to-earnings ratio has been on the rise and now stands near 18 times projected earnings over the next 12 months. That’s way above the 14 level where we started the year, and it exceeds the long-term average of around 16. Remember, it’s harder to grow the “P” side of that equation when the “E” side is on the decline.”

Although consumer spending is keeping economic growth from falling too far below 2 percent (Q3 GDP initially estimated up 1.9 percent), consumers are also saving more for a rainy day with a personal savings rate of +8 percent.

It is a sign that many consumers are sitting on the fence, waiting to see which way the political winds will blow next year. Consumers will keep spending as long as interest rates remain this low.


“…However, noteworthy risks to this outlook remain. In particular, sluggish growth abroad and trade developments have weighed on the economy and pose ongoing risks. Moreover, inflation pressures remain muted, and indicators of longer-term inflation expectations are at the lower end of their historical ranges. Persistent below-target inflation could lead to an unwelcome downward slide in longer-term inflation expectations. We will continue to monitor these developments and assess their implications for U.S. economic activity and inflation.”

And the 30-year conforming fixed rate mortgage rate is still below 3.50 percent for the most credit-worthy borrowers, which is keeping residential construction and sales at their current highs. The Mortgage Bankers Association just reported November 8 week applications jumped 13.0 percent for refinancing and 5.0 percent for the purchases, with purchase applications up 15 percent in a year.

Low inflation and low interest rates are good news for housing, given the endemic under supply of affordable housing, and growing homeless population. But it isn’t good news for overall economic growth, if it leads to falling prices—i.e. actual deflation and another recession.