Q4 Economic Growth…Watch Out Below!

We might have a problem with economic growth in the fourth quarter, thanks in part to Republicans’ 2017 tax cuts that were to stimulate longer term growth and jobs, believe it or not. The New York and Atlanta Federal Reserve estimate seasonally adjusted Q4 GDP growth to drop to just 0.3 to 0.4 percent, from Q3’s initial estimate of 1.9 percent growth, Merrill Lynch has a slightly more optimistic forecast of 1.5 percent.

This is a terrible number, if accurate. These are so-called early “nowcasts” based on very preliminary data, so much could change by Q4. But there has been a steady decline in growth from last year’s tax cut-fueled surge that is mirrored by the latest retail and industrial production figures.

Why were the tax cuts a bust? Fedex’s 2018 $1.6 billion tax “windfall” is a good example of what happened to that windfall, according to the New York Times. Fedex promised that the U.S. economy would see a “renaissance of capital investment” from the huge capital gains tax cut. But it never happened.

“If anything, the companies that received the biggest tax cuts increased their capital investments by less, on average,” said the Times article. The result was increased CEO salaries and massive stock buybacks, which benefited stockholders, but not their employees that received no salary boosts, or bonuses from the largesse.

“Fedex reaped big savings, bringing its effective tax rate to less than zero in fiscal year 2018 from 34 percent in fiscal year 2017,” continued the Times. The result was more financial engineering, rather than productive investments that would boost growth.


The Atlanta Fed nowcast said, “The GDPNow model estimate for real GDP growth (seasonally adjusted annual rate) in the fourth quarter of 2019 is 0.3 percent on November 15, down from 1.0 percent on November 8. After this morning's retail trade releases from the U.S. Census Bureau, and this morning's industrial production report from the Federal Reserve Board of Governors, the nowcasts of fourth-quarter real personal consumption expenditures growth and fourth-quarter real gross private domestic investment growth decreased from 2.1 percent and -2.3 percent, respectively, to 1.7 percent and -4.4 percent, respectively.” 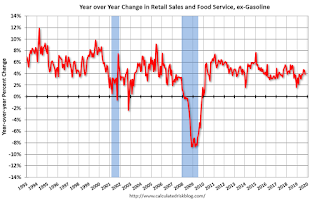 The steady decline in retail and food service sales ex-gasoline—a more reliable indicator of sales volume—is worrisome because it mirrors consumer behavior, which is the main driver of economic growth at present. Consumers have been saving more and spending less this year. Sales slowed to a 3.9 percent annual increase from what has historically been in the 5-6 percent range since 2011. This is even though consumers have remained optimistic about future prospects in the latest consumer sentiment surveys. 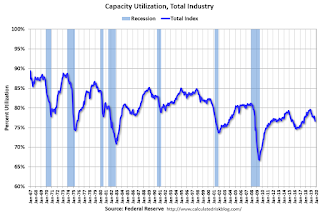 Small businesses that answer the National Federation of Small Business survey are still upbeat. “The small business optimism index showed modest but wide improvement in October, at 102.4 which is at the high end of expectations and up 6 tenths from what was an unexpectedly weak September. Eight of the index's 10 components improved in October led by plans to increase inventories and including increased plans to make capital outlays. Earnings trends, however, fell sharply and current job openings edged lower. And continued earnings decline is a problem."

Industrial production and consumer spending are really the two main components of growth.

Earnings have begun to decline, in a word, and who knows how much more earnings may fall with declining capital investment, which is the seed corn of future growth?