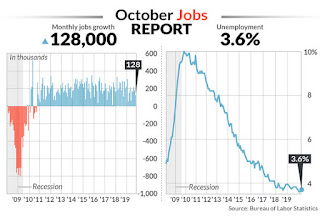 But most were not the good-paying jobs that will support a household, or buy a home. Restaurants and bars led the way in hiring by adding 48,000 jobs. Professional jobs rose by 22,000, social-assistance providers added 20,000 jobs, and financial companies increased employment by 16,000.

Payrolls fell by 36,000 in manufacturing that mostly reflected the GM strike, and government employment slipped by 3,000.

Just the 22,000 Professional jobs are considered middle-class, white collar jobs. In fact, most consumers and jobs are stuck with low-paying service sector jobs in retail, warehousing, and even healthcare.

This is a major reason U.S. economic growth is gradually slowing, as many economists reported last week. Hence the uncertainty about an upcoming recession, since consumers are still optimistic about job prospects and flush with earnings from the very low unemployment rate.

But ‘very low’ unemployment has been masking the real problem with this recovery. Wages and salaries have not been rising fast enough, in jobs that support an adequate standard of living, to bring back anything close to boom times again for most Americans.
Why not? We have to look at the history of economic recoveries.

The Obama administration’s one-time American Recovery and Reconstruction Act of 2009 (ARRA) put some $850 billion back into governments to end the Great Recession, which boosted a flurry of infrastructure improvements, and helped to balance some state budgets, but it didn’t even begin to catch up to the $2 trillion plus shortfall in outmoded infrastructure that included not only roads and bridges, but airports, the energy grid, water and sanitation facilities (e.g., Flint, Michigan and Newark, NJ), and a K-12 elementary education system ranked at the bottom in the developed world.

This is what any responsible governance policies should continue to do. The current economic recovery has benefited just the top 10 percent in income-earners, which is the reason for so much discontent among blue collar, working folk.

It was called the New Deal when we had a leader capable of answering the call, as did a President named Roosevelt, who said just prior to his reelection in 1936: "the old enemies of peace: business and financial monopoly, speculation, reckless banking, class antagonism, sectionalism…are unanimous in their hate for me — and I welcome their hatred." 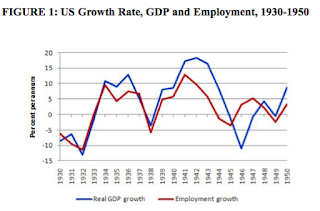 In fact, President Roosevelt did falter in 1937, when Republican’s won a congressional majority and he agreed to attempt to rebalance the federal budget while the Federal Reserve reduced the money supply as it had in 1930; which helped to precipitate the original downturn. The U.S. economy then dropped back into a second recession, which is why it was called the Great Depression; before Roosevelt reinstituted New Deal spending programs that brought growth back to pre-Great Depression levels.


“The New Deal ushered in a Golden Age for public works, as Washington at last took a leading role in funding infrastructure,” said one study of the New Deal. “The federal government, working hand-in-hand with state and local agencies, financed (and provided relief labor for) a huge array of projects. These emphasized the newest forms of technology and infrastructure, including highways, airports, dams, and electric grids, as well as more traditional public works, such as libraries, schools and parks.”

Those same policies need to be enacted today to bring back this recovery from the Great Recession, and keep it from becoming another Great Depression.