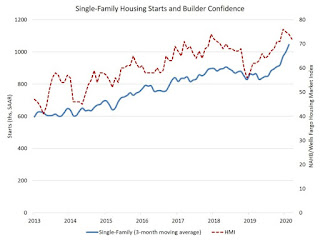 What happens to housing with the COVID-19 pandemic? It had been on the road to recovery with record low interest rates; so much so that single-family housing starts have been soaring since 2019 as more millennials have formed families and entered the housing market.

But can this last? A recent LATimes survey of homebuilders showed that builders were continuing to complete projects and selling them online (sales offices have closed, so no onsite visits allowed for prospective buyers), but not starting new construction or buying new housing sites, until there is more certainty about the U.S. economy that could lose as many as 3 million jobs during the current downturn, according to some forecasts.

HUD estimates there were 1.5 million housing starts in February, The three-month moving average for single-family construction is currently at a post-recession high. Single-family starts increased 6.7 percent to a 1,072,000 seasonally adjusted annual pace in February. Multifamily starts for units in 5+ unit properties declined 17 percent to a 508,000 annualized rate after a strong yet unsustainable start for 2020 for apartment construction.

There’s a reason for the sky-high demand for housing, especially in California. Rents have soared 40 percent from 2000 to 2018, whereas incomes have risen just 8 percent after inflation, according to UC Berkeley’s Turner Center for Housing Innovation.

Surprisingly, housing may be one of those getting the most support from government—in part because there is already a severe housing shortage, which has put governments in charge of what has become the 1.3 million unit shortage of affordable housing for low income buyers in California, alone. California’hopes to mitigate the shortage with last year’s $6 billion housing bill to provide more affordable housing.

The Census Bureau just reported sales of new U.S. single-family homes are up 14.3 percent from last February. And January’s new-home sales were already at a 12-1/2-year high. It is pointing to housing market strength that could help to blunt any hit on the economy from the coronavirus and keep the longest economic expansion in history on track. 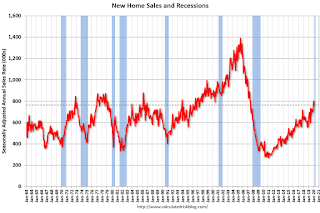 Builder confidence in the market for newly-built single-family homes fell just two points to 72 in March, according to the latest National Association of Home Builders/Wells Fargo Housing Market Index (HMI). Sentiment levels have held in a firm range in the low- to mid-70s for the past six months.

But a housing market that remains healthy depends on a recovering economy, and we don’t know when that may be. Estimates run from 6 months to 18 months, if job loss estimates go to the 3 million extreme end of forecasts.

MarketWatch’s Jeffery Bartash reports a “flash” reading by the forecasting firm IHS Markit showed declines in its composite activity indexes. The manufacturing index slipped to 49.2 from 50.7, when anything below a reading of 50 indicates contraction. The flash service index sank to 39.1 in March from 49.4, marking the lowest level recorded since similar data became available in October 2009, IHS said.


“Although exports have suffered, most manufacturers continue to make necessary items, especially consumer goods for Americans stuck in their homes. Some large companies are even shifting production to help make critical medical equipment that’s in short supply,” said Bartash.

Why? Interest rates are plunging to new lows as investors rush to safe-haven bonds, driving down conforming 30-year fixed interest rates to as low as 3 percent.

This also caused refinance applications to surge more than 50 percent in a recent week, according to the Mortgage Bankers Association.

The housing market is in a holding pattern, in other words, with government aid a big factor, including directives not to evict renters behind in rent, or foreclose on homeowners behind in their payments for government-insured mortgages.