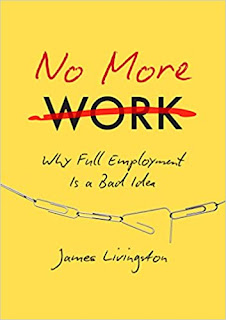 COVID-19 has finally done it. The new bi-partisan legislation working through congress that apportions money to the people and businesses that really need it—working (salaried) folk and small businesses with less access to credit—tell us why we are finally returning to an era when government was the solution (not the problem) to a more level playing field that distributed the products of work more equitably.

This is urgent not just because of the coronavirus pandemic. There will be little work as we have known it in coming decades for ordinary Americans, because of the onrushing ‘gig’ economy that will ultimately replace people in large segments of the economy with machines and more intelligent software.

Is this legislation a harbinger of a (new) New Deal?

It is taking more than a Great Recession that caused temporary pain to the one percent to return to bipartisan deal-making. Their profits came roaring back after it ended, thanks to the $700 TARP bank-Wall Street bailout and no prosecutions of the miscreants that caused it.

Such deal-making during the Great Depression was possible because we had a president and administration that understood when government should step in to soften adversity.

Government only works when there is a national consensus, in other words, such as when the unemployment rate reached 25 percent during the 1930s, there was no work to be had, and policymakers saw no other alternative.

What has triggered the sudden political consensus that has even Republican Senator Leader Mitch McConnell becoming a patriot, and now says, “this is the time for us to work together,” is the fact that the bottom seems to have fallen out of the economy. Treasury Secretary Steve Mnuchin is predicting as much as a 20 percent unemployment rate if congress doesn’t act quickly on the proposed legislation.

There are a lot of reasons for the Great Depression that plenty of economists have taken the time to explain, but not here. Just accept the fact that the private sector no longer wanted to spend, because consumers and private businesses had run out of money to buy and there was none to borrow—except from our government that creates the money, of course.

The Roosevelt administration went heavily in debt by lending to everyone that needed it—up to 120 percent of GDP, of what we produced—so that workers were hired directly by government to build our modern infrastructure, develop the Internet, build schools, and modern technologies that sent us to the moon.

Private industry couldn’t or wouldn’t do it then, as they aren’t doing it now. Treasury Secretary Mnuchin is negotiating with House Speaker Pelosi to inject as much as $1.5 Trillion into sectors that have suffered the most during the most recent recovery from the Great Recession.

What is needed? Mnuchin and Pelosi are proposing to give “most adults” $1,000 (earning less than $150,000 for a couple, maybe?) and every child $500. Aside from the money sent to families, the White House is asking for hundreds of billions of dollars to bail out the airline and other industries that have mostly been shut down as the nation to slow down the spread of COVID-19, extend unemployment insurance and boost Medicare spending due to the illnesses resulting from the new coronavirus.


MarketWatch’s Jeffery Bartash says “The short-term outlook is grim, though. A JP Morgan analyst estimated the economy could shrink by as much as 14 percent on an annualized basis in the second quarter. Such a decline — the most alarming on Wall Street — would be the biggest in modern times, even surpassing the worst of the 2007-2009 Great Recession.

It could take us back to the 1930s and Great Depression, in other words. The economy did come roaring back then; thanks in part to World War Two, unfortunately. Today there is even a better reason to put government back into the growth equation, to build in more of the safeguards that protect people and banks from the worst excesses like Dot-com or housing bubbles.

What will happen to all those less-skilled workers replaced by robots in the gigabite economy?

Books, such as Professor James Livingston’s No More Work, Why Fill Employment Is a Bad Idea, are telling us we have to think of work in new ways, as we research how to build a better economy and social safety net for those freed from the need to work to produce the things and services in the new gig economy.

Rather than having to produce the necessities anymore via work as we have known it—robots and Artificial Intelligence will be doing those jobs—people will then be able to find more creative ways to fulfill their need to have a meaningful life.