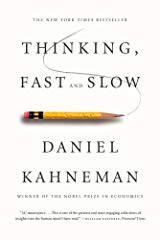 Thinking, Fast and Slow; what else should Nobel Laureate Daniel Kahneman be noted for, the son of Lithuanian Jewish parents fleeing the Russian Empire in the 1920s who grew up to the sound of black boots marching during the Nazi occupation of Paris, if not the study human behavior in both wartime and peacetime?

This was the second year Dr. Kahneman came to Westmont’s annual Breakfast Lecture series that packed the Santa Barbara Hilton’s largest ballroom. I’m sure many were there because they were looking for some insight into how our species may react to the current coronavirus scare that some are characterizing as a ‘Black Swan’ event (mostly economists), meaning a very serious event with no predictable outcome.

Dr. Kahneman emphasized that our decision-making propensities come from different parts of the brain that cause us to both ‘narrow frame’ (fast process) and ‘broad frame’ (slow process) the information we take in. And we need both parts to reach a rational decision that is in our best interests.

We have a tendency, or bias, to come to a conclusion or make a decision quickly, but Dr. Kahneman says not so fast! We need the slower-thinking side of us to see the larger picture. He said it can be just a matter of closing one’s eyes for a few minutes that slows down our thought process while allowing us to process what we’ve just taken in intuitively.

We should take the time to collect all the pertinent, ‘cognitive’ facts, in order to slow down our first reaction to what is right in front of us. He used several examples of narrow vs. broad frame thinking, such as forecasting future events, or diagnosing the high rate of skin cancer among farmers.

I was particularly interested in his take on how we make economic decisions. He is at the foundation of behavioral economics, or how humans make financial decisions that are not always in our best interest; particularly if we allow so-called free, unregulated financial markets to make choices for us.

There are now at least three Noble prizes that have been awarded for information biases in how we take in information and make decisions on how to intelligently invest. And they are mostly Keynesian, or neo-Keynesian economists that believe governments must take an active role in regulating markets to prevent excessive speculation, for instance, as happened with the Dot-com bubble in 2001, or housing bubble that resulted in the Great Recession.

Nobel economist Robert J Shiller described in his best-selling book, Irrational Exuberance how many investors and homebuyers relied on rumor, hearsay, or word of mouth, rather than serious research to buy a home, or invest in the financial markets and thereby drive up asset prices (such as housing) to unsustainable levels.

Economists and Psychologists call it herd behavior when investors flock to a particular investment because others are doing the same, rather than researching the history of the company or index to see if it is overvalued.

Dr. Kahneman and his partner, Amos Twersky, found that humans have an optimistic bias in forecasting favorable outcomes that we must be aware of, when making decisions based on those forecasts. We therefore need to look at the broader picture.

How will the lowering of interest rates, as the Fed is currently doing, affect both poor and wealthy consumers, for instance? Should we save more and spend less in the event of an economic slowdown or recession?

Stocks are overvalued in this 11th year of the current recovery just by looking at the current price-to-earnings ratio of the S&P. Why? The record profits of those corporations cannot be sustained with slower population growth and labor productivity—the two main factors that determine economic growth. Their earnings, the denominator of the P/E ratio, will therefore shrink, causing the ratio to rise above historical levels, hence certain stock assets become overvalued and will eventually fall.

That is what happened during the 2001 Dot-com stock bubble and 2007-09 Great Recession. P/E ratios soared to levels last seen before the Great Depression, which means history does provide lessons, if heeded.

Here are two of behavioral economist and Nobel prize-winner Robert J Shiller’s most memorable statements in Irrational Exuberance: “ 'It amazes me how people are often more willing to act based on little or no data than to use data that is a challenge to assemble.”…'The ability to focus attention on important things is a defining characteristic of intelligence."

We know it’s best to slow down one’s thinking process before making an important decision. But how often do we?