No Job Losses Due to Coronavirus—Yet 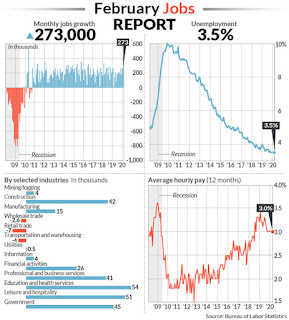 The Labor Department’s February employment survey took place in the middle of February, before the coronavirus began its worldwide spread. So we will have to wait for March employment figures to know its impact on employment, and almost every business sector in the U.S. economy.

The services industries are booming at the moment, as the above MarketWatch graph shows. There were a cumulative total of 218,000 new jobs created in the service sector, with 54,000 Education and

Health service jobs leading the way. Health service jobs may continue to grow, if they can find workers, as the health care industry will certainly be kept more than busy treating the effects of the coronavirus in the U.S. with infection totals mounting daily.

Manufacturing also showed life with 15,000 new jobs, after consecutive 12,000 job declines in the past two months. The unemployment rate even inched back down to 3.5 percent from 3.6 percent.

Restaurants and bars filled 53,000 positions and government employment rose by 45,000, including 7,000 temporary Census workers. The federal government is expected to add up to 500,000 temporary workers for the 2020 Census and hiring is already underway.

But stock investors are already seeing the oncoming recession, as interest rates have plunged to new lows. The 10-year Treasury note yield fell 18.6 basis points to an unheard of yield of 0.739 percent on Friday morning, per the St. Louis FRED graph. This is a sure sign stock investors fear the worst. 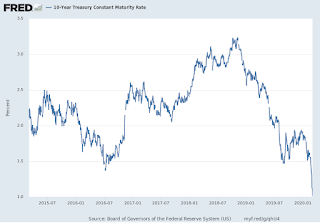 It will certainly boost the housing market, however, as mortgage rates are sinking to more than 50-year lows. This will make even more homes affordable to prospective buyers, as long as employment holds up. For instance, the 30-year High-Balance, Super/Conforming fixed rate has fallen to 3.125 percent with no origination fees with the most competitive lenders.

But the lack of substantial wage increases is becoming worrisome in a fully employed economy. The 3 percent average hourly wage rise in the report is barely above inflation, and so leaves no room for disruptions as I’ve been saying.

It may be the result of a service economy now able to employ only the lowest skilled, lowest paying jobs, as automation becomes a fact of American life and manufacturing continues to move overseas, in spite of the tariff raises.

The NBER business cycle Dating Committee won’t wait as long this time to call a recession, in my opinion.  It was called in December 2018, 12 months after the Great Recession actually began. Let’s see what happens over the next four months—until the end of second quarter in June, when we will know more about effects of COVID-19—which may speed up the looming slowdown.

Why should we know by then?  I say this because the Fed suddenly dropped their short term interest rates one-half percent last Wednesday, and are hinting at more rate cuts. The financial markets reacted in panic after a very short-lived rise. What does that tell us about business confidence? It tells us the Fed also sees a rocky economy ahead.  We don’t even yet know how COVID-19 is transmitted, much less how to treat it other than with quarantines and certain preventive measures.

The worldwide spread of the COVID-19 virus means a worldwide slowdown of economic activity. It’s now appearing in 92 countries at last count, with 101,781 cases of COVID-19, at least 3,460 deaths; 15 now in the U.S.  About 55,866 have recovered,  primarily in China's Hubei Province, according to the latest figures.

The greatest danger to the U.S. economy is a sharp cutback in consumer confidence and spending as we retreat to our homes to wait this out, while the slow response of our public health system will mean further disruptions, and even shortages of essential supplies needed to treat COVID-19.