The Wages of Fear in a Recession—Part II 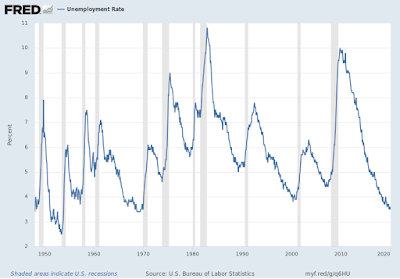 Is the U.S. economy already in recession? How can it be with more than 80 percent of the adult workforce employed? But that isn’t how recessions actually begin, as portrayed in the above St. Louis Fed unemployment rate history dating from 1950.

The latest COV-19 coronavirus news makes it a virtually certainty that the U.S. economy could go into recession this year. Why? America’s record income inequality—the worst since 1928 prior to the Great Depression—means many cannot afford to be quarantined from their work when it becomes a real pandemic that affects all of the United States.

A recent Brookings Institute study found that 44 percent of U.S. workers are employed in low-wage jobs that pay median annual wages of $18,000. And most of the 53 million Americans working in low-wage jobs are adults in their prime working years between about 25 to 54. Their median hourly wage is $10.22 per hour — above the federal minimum wage of $7.25 an hour but well below what's considered the living wage for many regions.

Recessions begin when the economy, based on four major indicators such as the unemployment rate, manufacturing and trade, and personal incomes have peaked; i.e., no longer continue to rise as determined by a Business Cycle Dating Committee of the National Bureau of Economic Research (NBER).

The worldwide spread of the COVID-19 virus means a wholesale slowdown of economic activity in coming months. We are already seeing a slowdown in several U.S. sectors—especially manufacturing—and growth may have peaked in the consumer-driven service sector as well, though not yet contracting.

If American workplaces are shut down, as they are in China, S. Korea, Italy, Iran, and parts of Japan, these workers that have neither health plans to pay for sick-leave (a full 25 percent of the lowest paid service workers have no paid sick-leave coverage), or savings to fall back on until they can return to work, would have to rely on unemployment insurance or welfare.

Millions could therefore become unemployed, as happened during the Great Recession. One worrisome similarity is that stocks recently dropped to lows last seen during the Great Recession.
In other words, the U.S. is totally unprepared for any significant epidemic, or a pandemic, as CDC officials are warning. So how do we know when economic activity has peaked and begins a sustained fall?

The Great Recession began in December 2007, yet the unemployment rate had been rising for six months—from its low of 4.4 percent in June 2007 to 5.0 percent in December. And it wasn’t the Fed that declared it a recession 12 months later, but the NBER’s Business Cycle Dating Committee based at Harvard, as I have said.

The Business Cycle Dating Committee waited until December 1, 2008, a year later, to declare that the Great Recession had started in December 2007 to be sure that the rise was a continuing trend, though the unemployment rate didn’t peak and begin to come down until October 2009; at 10.0 percent, 4 months after the recession was declared to have ended!

This is not to say that is always how recessions begin, but recessions are measured from a peak of activity to its ‘trough’, as I said, when activity begins to pick up again—a total of 18 months in the case of the Great Recession.

Why do recessions begin when they do? The Great Recession in particular began because consumers and banks became so heavily indebted building too much housing in an earlier era of very low interest rates, and housing values began to decline that had been rising in double digits earlier in the decade.

Alan Greenspan’s Fed had then raised interest rates for 2 years in an attempt to slow inflation that had also reached double digits. And borrowers then began to default on their rising mortgage payments that they could no longer afford.

The U.S. economy is facing such a dangerous journey through this outbreak of the coronavirus that CNN Doctor Sanjay Gupta has said is 20 times more deadly than the ordinary flu based on initial studies, as I said last week, and WHO now says has a fatality rate of 3.4 percent, almost 40 times that of the ordinary flu.

There are 128 cases and 11 deaths, according to the latest figures from Johns Hopkins Whiting School of Engineering’s Centers for Systems Science and Engineering, including among 45 people who were repatriated from the Diamond Princess and from Wuhan, China, the city that first detected the virus in December. Six people are counted as recovered in the U.S.

The greatest danger to the U.S. economy is a sharp cutback in consumer confidence and spending, since it is consumers that are now keeping economic growth at 2.1 percent with the 6-month decline in manufacturing activity mainly due to the trade wars. And the COVID-19 outbreak means further supply disruptions.