The 2nd estimate of second quarter Real Gross Domestic Growth slowed to 2 percent, from 3.1 percent in January. It looks like growth is slowing to the average rate that has prevailed since the end of the Great Recession.

Consumers are reacting to the slowdown in the U. of Michigan sentiment survey of 600 telephone respondents, which was well below expectations and the lowest reading since October 2016. The expectations component also fell more than 10 points in the month with the current conditions component down more than 5 points.


“The report cites consumer apprehension over rising tariffs which, for this phone sample, were spontaneously mentioned by 1/3 of the respondents” said Econoday.

There have been other signs of slower growth as well. The Economist reports US Steel announced earlier in August it would lay off 200 workers in Michigan. Sales of camper vans dropped by 23 percent in the 12 months ending in July, threatening the livelihoods of thousands of workers in Indiana, where many are made. Factory workers are not the only ones on edge. Lowes, a retailer, recently said it would slash thousands of jobs. Halliburton, an oil-services firm, is cutting too.

Why the slowdown now? Consumers are still spending (brown line), as the BEA’s Disposal Personal Income graph shows—but it’s a lot more than they are earning (blue line). 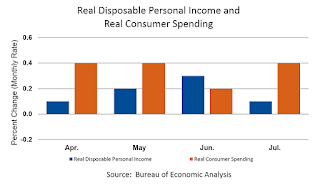 This means they could stop spending if any more shocks occur, such as the possibility that China might wait until after the 2020 election to make a deal.  Exports and residential investments also declined from Q1.


Manufacturing is the mainstay of exports. Employment in durable-goods manufacturing peaked in June 2006, about a year and a half before the onset of recession. This year has been another brutal one for industry. An index of purchasing managers’ activity registered a decline in August.

Since last December manufacturing output has fallen by 1.5 percent. Hours worked—considered to be a leading economic indicator—are declining. Some of this is also linked to President Donald Trump’s trade wars, which have hurt manufacturers worldwide.

Last Friday China said it would  increase existing tariffs from 5 percent to 10 percent on more than 5,000 U.S. products, including soybeans, oil and aircraft. A 25 percent duty on American-made cars would also be reinstituted. The value of these products is estimated by the Chinese Commerce Ministry to total around $75 billion.

Trump responded after financial markets closed by saying he would raise current U.S. tariffs. A 10 percent duty on $300 billion in Chinese goods will be raised to 15 percent in September while a 25 percent tariff on $250 billion in imports would be increased to 30 percent in October.

Does that look like they are near to making a deal?