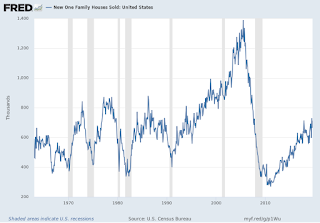 "Sales of new single‐family houses in August 2019 were at a seasonally adjusted annual rate of 713,000, according to estimates released jointly today by the U.S. Census Bureau and the Department of Housing and Urban Development. This is 7.1 percent above the revised July rate of 666,000 and is 18.0 percent above the August 2018 estimate of 604,000. "

A robust housing market could mitigate what is increasingly looking like a looming manufacturing recession due to the ongoing and increasingly contentious trade wars.

Another housing market indicator was also positive, per the National Association of Realtors (NAR).

The Pending Home Sales Index, www.nar.realtor/pending-home-sales, a forward-looking indicator based on contract signings, climbed 1.6 percent to 107.3 in August, reversing the prior month’s decrease. Year-over-year contract signings jumped 2.5 percent. An index of 100 is equal to the average level of contract activity.


“It is very encouraging that buyers are responding to exceptionally low interest rates,” said Lawrence Yun, NAR chief economist. “The notable sales slump in the West region over recent years appears to be over. Rising demand will re-accelerate home price appreciation in the absence of more supply.”

This is while the Institute for Supply Management’s manufacturing index fell to 47.8 percent last month from 49.1 percent, marking the lowest level since June 2009, when the Great Recession ended. 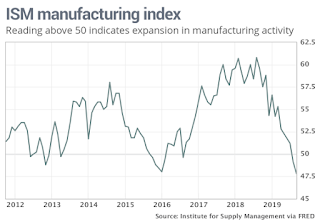 “Comments from the panel reflect a continuing decrease in business confidence,” said the report, “…The New Export Orders Index continued to contract strongly, a negative impact on the New Orders Index. Consumption (measured by the Production and Employment indexes) contracted at faster rates, again primarily driven by a lack of demand, contributing negative numbers (a combined 3.3-percentage point decrease) to the PMI® calculation.”

The decline in exports was due to a overall decline in foreign trade. A most recent example of the hurt from that decline was the closing of a Louisiana steel mill because it couldn’t pay for the rising costs of imported scrap steel that it made into finished steel projects, due to the 25 percent tariff (tax) on imported steel.

It remains to be seen whether other business sectors are beginning to contract, as well. Consumer spending, for example, is on the downward trend, rising just 0.1 percent in August, and 2.3 percent annually, approximately one-half of its 4.8 percent growth rate through the first two quarters, according to the last Q2 GDP estimate. It was the lowest spending in six months, and doesn’t augur well for the rest of the year.

And the latest U-turns in Chinese trade negotiations are coming from Trump’s proposal to limit Chinese company listings on U.S. stock exchanges, which is just one more reason for the increasing uncertainties about future growth.

So I keep wondering how much longer can a healthy housing market and low interest rates keep consumers happily consuming?