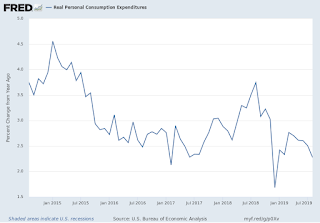 We will be lucky to stay at 2 percent growth in this third quarter ending in September. So say a survey of economists, with a PMI Composite FLASH reading of next week’s manufacturing and non-manufacturing surveys flat, consumers spending flat, and consumer sentiment straining to hold onto some semblance of optimism.

Consumer spending is on the downward trend, rising just 0.1 percent in August, and 2.3 percent annually, approximately one-half of its 4.8 percent growth rate through the first two quarters, according to the last Q2 GDP estimate. Its inflation rate remained at 1.8 percent. It was the lowest spending in six months, and doesn’t augur well for the rest of the year.

Why? I mentioned last week that consumers are saving more, spending less out of caution and because a larger percentage live off their savings that yield less with such low interest rates.

But more ominously, the latest U-turns in the Chinese negotiations come from Trump, who is now proposing that at least some of the less transparent Chinese companies be delisted from US stock and bond exchanges. We have no idea at this early stage what that means, since most Chinese companies use the security blanket of being partially owned by the Chinese government to hide their real income and outgo. But it could affect the sales’ volume at least—therefore liquidity? 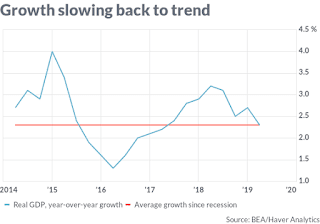 The latest figures show the economy expanded 2.3 percent in the past year, exactly the same pace of the past 10 years since the Great Recession ended, says MarketWatch economist Rex Nutting. With prospects for even slower growth ahead.


“Almost every forecast from professional economists, the Federal Reserve, the Congressional Budget Office, the International Monetary Fund (IMF) and the Organisation for Economic Co-operation and Development (OECD) — but not the White House! — looks for growth of around 2% per year for the foreseeable future,” said Nutting. “ With the growth in the potential labor force slowing from about 1% per year to about 0.2%, it’ll take some very good productivity numbers just to hit 2%.”


A measure of business conditions in the Chicago region, the Chicago PMI index, contracted for the third time in four months, reflecting ongoing struggles by American manufacturers as well as the two-week-old General Motors workers strike. The Chicago PMI business barometer dropped to 47.1 in September from 50.4 in the prior month, MNI Indicators said Monday. Any reading below 50 indicates worsening conditions.

It is a sign that this week’s manufacturing and non-manufacturing (service sector) activity readings will show more weakness ahead.

Let us hope it won’t further dampen consumer confidence for the holidays.