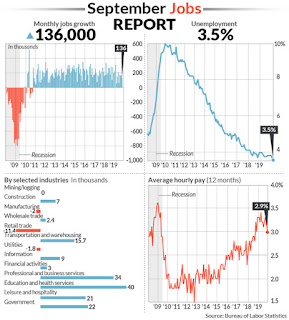 The unemployment rate dropped to a 50-year low, and there are still 6 million jobs available. Private payrolls expanded by 114,000 after an upwardly revised 122,000 advance the prior month, according to a Labor Department report Friday that missed the median estimate of economists for a 130,000 gain. Total nonfarm payrolls climbed a below-forecast 136,000.

This is the slowest pace of job growth in four months, as businesses grew more cautious about hiring, but employment gains for August and July were revised up by a combined 45,000. Such are the vagaries of a fast-changing, but still robust jobs market.

With manufacturing activity weak, most hiring in September was concentrated in the services sector. Education and health care providers filled 40,000 positions. Government added 22,000 workers in
September, but only 1,000 of the jobs were due to federal hiring for the 2020 Census. Economists had expected a much bigger increase in census workers. Job growth has slowed from 223,000 per month in 2018 to 158,000 over the last three months. 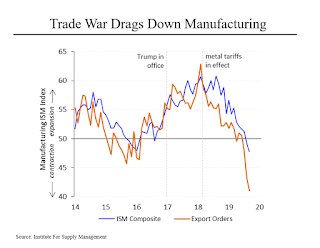 Trump’s trade war has had the biggest impact on the manufacturing sector, which contracted for the second straight month (losing 2,000 jobs), and featured the biggest pullback in export activity since the depths of the 2009 crisis, according to economist Steven Rattner.
Foreign trade and exports, the biggest drivers of manufacturing activity, are slowing grinding to a halt, in other words.

And the WTO has just ok’ed $7.5 billion in tariffs on European exports to the US, in part because of EU government subsidies to their airplane manufacturer Airbus, but also French wines and other products considered to be government subsidized.

Washington plans to impose a 10 percent tariff on aircraft imported from Europe and apply a 25 percent import tax on other agricultural and industrial items on October 18, the Office of the US Trade Representative said in a statement.


However, "If the US decides to impose WTO authorized countermeasures, it will be pushing the EU into a situation where we will have no other option than do the same," European Commissioner for Trade Cecilia Malmstrom said in a statement.

This will further reduce world trade and economic growth, as the EU accounts for 25 percent of US exports, needless to say.

It’s a vicious circle of tit-for-tat retaliation that can only worsen the upcoming recession—which doesn’t look much like a recession at the moment—but stay tuned to what ultimately happens with China, as I’ve been saying.