Real gross domestic product (GDP) increased at an annual rate of 1.9 percent in the third quarter of 2019, according to the "advance" estimate released by the Bureau of Economic Analysis. In the second quarter, real GDP increased 2.0 percent.

U.S. economic growth is gradually slowing; how much is still uncertain, since consumers are still optimistic about job prospects and flush with earnings from the very low unemployment rate.


“The mismatched trends in personal finances and buying conditions have resulted in the lackluster pace of consumer spending throughout the expansion, said U of Michigan’s chief economist, Richard Curtin. “Earlier in the expansion, dismal growth in household incomes and jobs were matched with record favorable references to prices and interest rates on home and vehicles, while in the later part of the expansion very favorable incomes and job prospects were matched with the fewest favorable references to prices and interest rates in decades-with those lows becoming the expected norm.”

The mismatch has kept consumer indebtedness (aside from education loans) at manageable levels, said Curtin, and positive finances have recently buoyed spending so as to ensure the continuation of the expansion.

The BEA report said the increase in real GDP in the third quarter reflected positive contributions from personal consumption expenditures (PCE), federal government spending, residential fixed investment, state and local government spending, and exports that were partly offset by negative contributions from nonresidential fixed investment and private inventory investment. Imports, which are a subtraction in the calculation of GDP, increased.

There is more to this story, of course; in this case the almost total lack of any inflation. The Fed’s preferred measure of inflation, the PCE implicit price deflator, fell to 1.5 percent, down from 2.4 percent last quarter, which is not a healthy sign of demand, but sliding into disinflationary territory. Steadily declining inflation is usually a precursor to deflation, the most visible sign of shrinking GDP growth—and a possible recession. 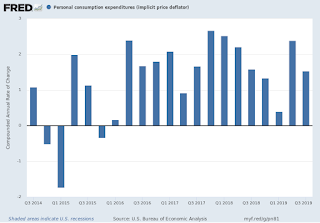 The housing industry also contributed to the economy’s growth for the first time in nearly two years. Residential investment climbed 5.1 percent. And ultra-low mortgage rates have drummed up more demand and spurred builders to boost construction.

The NRA’s just-released pending home sales report also showed higher home sales ahead.
Pending home sales grew in September, marking two consecutive months of increases, according to the National Association of Realtors. The Pending Home Sales Index (PHSI), www.nar.realtor/pending-home-sales, a forward-looking indicator based on contract signings, rose 1.5 percent to 108.7 in September. Year-over-year contract signings jumped 3.9 percent. An index of 100 is equal to the level of contract activity in 2001.


Historically low mortgage rates played a significant role in the two straight months of gains, according to Lawrence Yun, NAR’s chief economist. “Even though home prices are rising faster than income, national buying power has increased by 6% because of better interest rates,” he said. “Furthermore, we’ve seen increased foot traffic as more buyers are evidently eager searching to become homeowners.”

Consumers could remain optimistic through the holidays, but I doubt much beyond that. There is too much uncertainty from businesses, where capital investments have plunged. Although consumer spending didn’t match the second quarter’s 4.6 percent increase, outlays still rose 2.9 percent. Consumer spending accounts for about 70 percent of all U.S. economic activity.