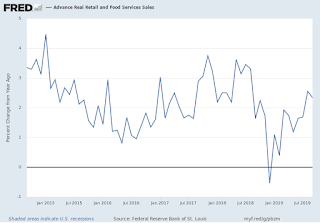 U.S. retail sales that mirror consumer spending, which powers some two-thirds of U.S. GDP growth, fell for the first time in seven months in September, raising fears that a slowdown in the American manufacturing sector could be starting to bleed into the consumer side of the economy.

Retail sales have increased 2.3 percent year-over-year, which is not a good number, as can be seen in the above graph dating from 2015. It averaged closer to 4 percent from 2010 to 2015, before falling to its current level.

And manufacturing has been hurting this year, as manufacturing production fell 0.5 percent, in the Fed’s latest Industrial Production report, after rising 0.6 percent in August due to a strike at General Motors. U.S. industrial output overall dropped 0.4 percent from a month earlier in September 2019.

That was the sharpest decline in industrial output since April. For the third quarter as a whole, industrial production rose at an annual rate of 1.2 percent following declines of about 2 percent in both the first and the second quarters, per the below graph, with brown bars in graph showing negative growth.

Hence economic growth is looking weaker for the third quarter, with GDP growth now forecast at just 1.5 percent, according to a projection by CNBC and Moody’s Analytics.


“Weak consumer spending and inventory data caused economists responding to the Rapid Update tracker to lower their collective GDP projections by one-tenth of a percentage point to 1.5 percent, the lowest level yet for Q3,” said CNBC.

Consumers must keep spending more than they are saving to keep this economic afloat, in other words. The University of Michigan sentiment survey says consumers are optimistic on that score.

Econoday commented that last Friday’s U of Michigan survey bounced sharply higher in October, to a much stronger-than-expected 96.0 that easily exceeds Econoday's consensus range.


“The assessment of current conditions is the strong point in October's report, up nearly 5 points to 113.4 in what is a positive indication for consumer spending this month. Expectations are also higher, up 1.4 points to 84.8 and together with the jump in current conditions, suggest that the impeachment inquiry of President Trump is not having a significant impact on the consumer. In fact, the report notes that the ongoing GM strike was mentioned by respondents nearly twice as much as the impeachment.”

The GM strike has reportedly been settled, but the trade wars haven’t, so it remains to be seen whether consumers can remain this optimistic about their future.