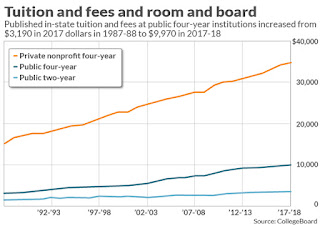 Yes, an excellent, tuition-free college education is possible. In fact, it’s become a movement supported by non-profit organizations, as well as cities and states that support their institutions of higher learning with taxpayer monies. Nationally, the College Promise Campaign is making news with its message and outreach stated on its website, CollegePromise.org.


“The College Promise Campaign is a national, non-partisan initiative to build broad public support for funding the first two years of higher education for hard-working students, starting in America’s community colleges. We want the first two years of college to become as universal, free, and accessible as high school has been for nearly a century,” said College Promise on it website.

That’s a start. College students have borrowed some $1.5 trillion to date with an average debt load of $35,000 per student. This wasn’t always the case for public colleges and universities. Until the 1960s, taxpayers paid most of the cost for state-run higher education, such as at the University of California system of nine UC universities and the 23 California State college campuses created to take in all eligible students that weren’t accepted to the nine UC campuses.

The programs vary, from scholarships that pay for 2 years of community college, to grants and scholarships that pay for all four years. But many of those colleges and universities are in smaller, out of the way locations, where educational costs are cheaper, and said institutions are eager to lure students away from the major metropolitan centers.

The above MarketWatch graph shows the huge cost disparities between public and private colleges, and many studies confirm that a public college or university education breeds as much success on reaching student life goals as do private schools.

The College Promise Campaign, a clearinghouse and advocacy organization for free-college initiatives, counts more than 200 programs across the country offering some version of a promise program. But that is hardly enough, when most other developed countries offer a tuition-free higher education.

In fact, most EU and non-EU Nordic countries offer tuition-free college education to foreigners, as well as their own citizens. They can be found on the Top Universities website, and include France, Germany, Norway, Iceland, Finland, Denmark, and Sweden. Even South American countries, such as Argentina offer a tuition-free college education to foreign students.

These countries put the American educational system to shame. They seem to understand the importance of higher education in improving the productivity and prosperity of their citizens. What could be more important that educating our workforce in an ever-changing world, where a college degree becomes even more important?

Cornell University is the only major U.S. land-grant institution that is tuition-free for students from low and middle-income families earning less than $60,000 annually. Its description is heartening—if only other large, public universities would follow:


“Established in 1865, Cornell University is a privately endowed research university and a partner of the State University of New York. As the federal land-grant institution in New York State, Cornell has a responsibility—unique within the Ivy League—to make contributions in all fields of knowledge in a manner that prioritizes public engagement to help improve the quality of life in New York state, the nation, the world. Cornell is located in Ithaca, New York and enrolls nearly 22,000 students. With an acceptance rate of over 10%, Cornell is the Ivy League institution with the highest acceptance rate.”

America needs more such education programs, if we are to compete in the modern world.