A Softer Landing For Inflation? 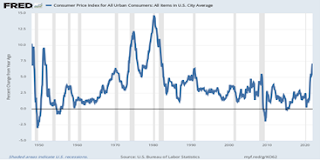 Will inflation keep rising, squeezing consumers, or return to a more normal range this year? The Consumer Price Index (CPI) that measures retail goods and services rose to 7.1 percent in December and has forced the Fed to promise to raise interest rates several times to ‘tame’ a rising inflation rate that seems to worry the pundits and bankers more than most consumers.

That’s because once the Fed starts taking money out of circulation by selling the $4 trillion plus in securities it’s holding, the money supply should shrink and thus take away the punch bowl of easy money that has prevailed during the pandemic and pushed the financial markets to record highs.

So, the debate du jour is can the Fed take away the punchbowl without sinking the economy into another recession? There’s a lot of money in circulation, thanks to all the pandemic aid, but what happens when it’s withdrawn? The hope is for what is called a ‘soft landing’, a slowing of economic activity that doesn’t morph into an economic slump.

It would be nice if inflation could tame itself without too much government intervention. Inflation could moderate this year because consumers annually cut back on spending after the holidays to pay down their credit cards and save for the income tax season.

But even so, the Fed must act to look like it’s on the ball by making noises that it’s ready to raise the price of borrowed money by acting preemptively. That is supposed to lower inflation expectations and thus dis-incentivize consumers and businesses from rushing to buy before the next price rise.

And the answer is much more complicated today because this inflation is caused by a serious shortage—of goods, services, and employees to manufacture and distribute them.

So all of this is in turn dependent on the course of the ongoing COVID-19 pandemic that is keeping workers away from work, and causing the supply chain bottlenecks.

As a side note, a recent study by two UC Davis Labor economists in Econofact.org — Labor Shortages and the Immigration Shortfall, posits that part of the labor shortage is due to a shortfall in immigrants over the past two years—some 2 million working age adults—due to restrictions placed on immigration from the pandemic.

And approximately 1 million are college-educated, which could impact productivity and employment over the longer term.

They cite other causes for the labor shortage, such as increased retirement and increased bargaining power of workers as playing an important role.

The authors also contend, “While more generous unemployment and welfare benefits introduced during the crisis may have discouraged workers from taking low-paying jobs in 2020 and early 2021, they do not seem to be the cause of current shortages, since most of those benefits expired by mid-2021. Recent anecdotal and preliminary evidence finds a push by workers for more job-flexibility, safety and, generally, better conditions causing resignations and contributing to unfilled job openings.”

So the labor shortage could last for years, unless Washington and Congress get their immigration act together. Immigration has historically been a major source of U.S. population and job growth.

In fact, we shouldn’t forget that we are a nation of immigrants that has always been dependent on immigrants, and the effect of the immigration shortfall is much more worrisome than inflation because studies show they bring a high level of skills that are good for economic growth.

So even speeding up approval of a backlog of 460,000 entry visas cited by the State Department as still unprocessed could make this a softer landing.

Posted by Popular Economics Weekly at 9:32 AM No comments:

We Are So Close to Full Employment 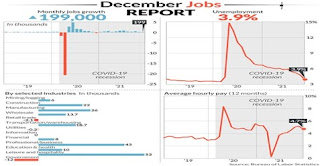 It is uncanny that just 199,000 nonfarm payroll jobs were created in one Labor Department establishment survey, while a separate and smaller household survey showed that 651,000 people found jobs in December after a 1.1 million gain in November.

This kind of variability is typical when the U.S. economy is nearing full employment. That and the soaring inflation rate (6.8 percent of late) show that the demand for goods and services is far outstripping supply at the moment.

The unemployment rate dropped to 3.9 percent from 4.2 percent—just above the fully employed 3.6 percent level before COVID-19 shut down the economy. So, the American economy is close to full employment even with the Omicron variant still scaring workers from returning to work.

The other question is when will producers catch up to soaring demand because the U.S. economy is showing a classic case of overheating at the moment.

The above Calculated Risk graph shows how quickly we have closed in on full employment—much faster than the 2001 and 2007 recessions (blue and brown lines in graph), for instance.

Supply will have a chance to catch up to demand and tame inflation when the Omicron variant is tamed.

The U.S. economy regained 6.5 million jobs in 2021, but employment is still short of the pre-pandemic peak by almost 4 million jobs. The U.S. employed 152.5 million people just before the pandemic erupted. Total employment rose to 148.9 million at the end of last year

Average hourly pay has risen 4.7 percent in 2021, which tells us that companies will pay whatever it takes to hire more workers.

Where are they hiring? Leisure and hospitality added 53,000 jobs, which means more people are eating out and traveling over the holidays. Professional businesses hired 43,000 people, manufacturers added 26,000 jobs, construction employment rose by 22,000 and transportation and warehouse firms beefed up payrolls by 19,000.

It’s good news that Americans are continuing to return to work and the economy is nearing full capacity. Please Fed Governors, let that picture sink in before you begin to raise interest rates, which would slow down this recovery from the worst pandemic in more than 100 years.

So, we should begin to enjoy the fact that this economic recovery has just begun, rather than worry about its growing pains.

Posted by Popular Economics Weekly at 12:49 PM No comments:

There are small signs of a slowdown in the rise of housing prices. Core Logic, a real estate data provider, sees some moderation in this New Year.

“As we close 2021, housing market indicators, including S&P CoreLogic Case-Shiller Index, suggest that the housing market will have another strong year in 2022. While the expected slowing of home price growth suggests overall annual appreciation in 2022 will fall shorter than that of 2021, the annual average of 7% is still higher than the average 5% seen between 2010 and 2020.”

Housing’s annual price appreciation is slowing in part because new construction is making up some of the housing shortage.

This is resulting in single‐family housing starts in November to jump 11.3 percent above the revised October figure of 1,054,000.

But inventories are still at rock bottom, with unsold inventory at a 2.1-month supply in November, the lowest since January. That’s even lower than 2.3 months in the same month last year, and a 4-to-6-month supply of homes for sale during more normal times.

That is making NAR chief economist Lawrence Yun cautious about affordability in the New Year:

"Buyer competition alone is unrelenting, but home seekers have also had to contend with the negative impacts of supply chain disruptions and labor shortages this year," he said. "These aspects, along with the exorbitant prices and a lack of available homes, have created a much tougher buying season."

How long could it take for the supply of homes available to purchase catch up the demand? It depends on when more working age adults return to the workforce and suppply chains become unchained.

The labor shortages may improve this New Year. As a predictor of Friday’s unemployment report private payrolls rose by 807,000 in December, according to the ADP National Employment Report released Wednesday. That’s the strongest gain since May.

This could begin to improve the housing supply.

Then we must wait for the supply-chains to recover as countries ramp up production and the various trade tariffs are reduced that have driven up the cost of building materials, with lumber prices still higher than in pre-pandemic times.

Posted by Popular Economics Weekly at 11:13 AM No comments:

The Bureau of Labor Statistics reported that job openings decreased in November to 10.6 million from 11.1 million in October (yellow line in above graph).

It’s a sign that more workers are returning to work. So huge is the U.S. job market that hiring rose by 191,000 jobs to 6.7 million in November. The hiring rate rose to 4.5 percent from 4.4 percent in the prior month.

This suggests that hiring in both the service and manufacturing sectors is picking up, a good sign for continuing job growth in 2022.

The number of job openings (yellow) were up 56 percent year-over-year. Quits were up 37 percent, year-over-year. The JOLTS report showed that people quitting their jobs rose by 370,000 to 4.5 million in November.  The quits rate rose to 3 percent from 2.8 percent in October, matching the highest quits rate of the pandemic era.

Another indicator of future job prospects is the decline in weekly initial jobless claims for unemployment as unemployment benefits expire.

Weekly claims are down from their high of 6 million during the pandemic to 198,000 in the latest week. Salaried employees can’t wait much longer to return in greater numbers in the New Year after spending the excess savings accumulated during the pandemic.

Nobel laureate Paul Krugman has the last word this week in a recent NY Times column, in comparing the swiftness of this jobs recovery to President Reagan’s 1982 recovery which Reagan called “morning in America” that boosted his 1984 reelection.

“Yes, by this measure (and many others) we’re in the middle of another morning in America, despite the drag caused by a lingering pandemic and supply-chain disruptions,” said Professor Krugman.

With this kind of a jobs recovery, what should economic growth look like going forward?

The Atlanta Federal Reserve’s GDPNow model estimate for real GDP growth (seasonally adjusted annual rate) in the fourth quarter of 2021 is 7.4 percent on January 4, down from 7.6 percent on December 23, says their press release.

So overall, 2021 real GDP growth could be upwards of 5 percent. The last time it reached this height was in the 1980s. And since this is the beginning of another year, we can call it the morning of a successful 2022 New Year.

Posted by Popular Economics Weekly at 11:54 AM No comments: