The Times Are Changing 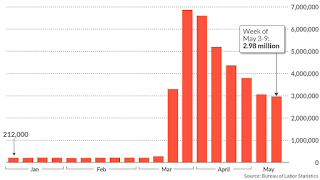 “The Times They Are a Changin” was Bob Dylan’s song for the 1960’s. Change was happening because of the Vietnam War and civil rights era. That is nothing like the coming changes we will see in the war against COVID-19.

In the week ending May 9, the advance figure for seasonally adjusted initial claims was 2,981,000, a decrease of 195,000 from the previous week's revised level, as the number of laid off workers has now reached 26 million, far past that of the Great Recession.

It doesn’t take rocket science to know what needs to be done to bring us out of this record economic downturn. It must be a nationally coordinated response to a worldwide pandemic, yet the White House and Republican Party is living by policies based on ignorance, with the denial of science and facts the means they use to carry out such policies. And it will not end well in the face of a virus that has no party affiliation.

The pandemic will change our way of life, just as the Great Depression and World War II changed America from an industrial and farming nation to a consumer and high tech nation.It has highlighted the major weaknesses in our broken economic and healthcare systems, and everything else government needs to do better that the private sector can’t do

Doctor Rick Bright, former head of the federal government’s vaccine testing program testified today in front of a House committee that without a science-based national response to the pandemic, 2020 will be the “darkest winter in modern history.

“The mortality of the pandemic could be “unprecedented” and ultimately outstrip the 50 million casualties of the 1918 influenza epidemic," wrote Bright in his prepared testimony, who was recently transferred from his position as Biomedical Advanced Research and Development Authority director.

What does Dr. Brightmean by a national response? The federal government has lacked a coordinated plan to first, provide enough PPE to weather not only the current outbreak, but what may occur in the fall and next year when the annual flu season hits that killed more than 70,000 last year.

But he also mentioned the fact that there was not yet a coordinated plan to produce and distribute enough vaccine “equitably and fairly” to everyone once it was developed. And this after mentioning a 12-18 month time frame to produce a viable vaccine was “highly optimistic”. It took up to 10 years to produce an effective Ebola vaccine, for instance.

So what are the changes that are needed in this new world of dangerous pandemics, in part brought on by geopolitical strive and a crowding out of natural habitats that has put us in closer contact with those creatures that carry such viruses?


“Perhaps rebalancing is a useful word,” said the NYTimes’ Roger Cohen recently. “From consumption to contemplation, from global to local, from outward to inward, from aggression to compassion, from stranger to guest, from frenzy to stillness, from carbon to green.”

What comes to mind is the social isolation requirement that will mean less crowded conditions at work and play; also the realization that we are all in this together if we want to survive, as well as save what is left of the natural planet.

I should emphasize there will be changes to the workplace as well. There has to be more reliance on the digital world that enables work at home that will also replace all those workers in warehouses, retail and transportation with robots and Artificial Intelligence.

And what if many of the 26 million have no jobs left when this economy recovers, as work becomes more dependent on computers and AI? Then jobs will have to be created elsewhere, such as in healthcare (some 300,000 contact tracers probably needed to monitor future outbreaks), environmental protection (to have clear air and water) infrastructure (e.g., to save drowning cities), education, and above all, new Research and Development to develop future ways to live in this new world.