What Is the Future of Interest Rates?

The deficit is moving to the back burner with Donald Trump and congressional Republicans in charge of Washington, and that is causing interest rates to rise quickly. Republicans leaders on Capitol Hill are now papering over divisions with Trump and deficit hawks are sounding the alarm, reports Politico.

“There is now a real risk that we will see an onslaught of deficit-financed goodies — tax cuts, infrastructure spending, more on defense — all in the name of stimulus, but which in reality will massively balloon the debt,” said Maya MacGuineas, president of the Committee for a Responsible Federal Budget.


So it's no longer a secret that bond yields are rising, with the 10-year bond yield now at 2.25 percent up from 1.71 percent just one week ago. But this is still far below the 4-6 percent yields in mid-2000, when 4 percent inflation and 6 percent fixed rates prevailed.

Calculated Risk’s Bill McBride predicts higher mortgage rates ahead, though still at historic lows. “With the ten year yield rising to 2.25 percent today, and based on an historical relationship, 30-year rates should currently be around 4.1 percent,” he said.

So we know part of the reason the 10-year Treasury--the main determinant of mortgage rates--is rising so quickly, after staying below 2 percent for most of this year. It’s also partly because we are at full employment while incomes are rising, and rising wages are two-thirds of product costs. Hence companies will raise their prices in response to such rising costs.

But that alone can’t account for such a quick rise. It has to be because investors and the financial markets are anticipating that President-elect Trump will be able to push through a massive, possibly $1 trillion plus infrastructure rebuilding with little thought to the budget deficit, as Politico reports.  It was a campaign promise, and he also wants to cut taxes.

This happened in 2001, when GW Bush pushed through massive spending to pay for his Wars on Terror, while also cutting taxes. His budget deficit therefore increased, and bond markets in particular don’t like large deficits, as it means too many bonds are in circulation to pay for those deficits, which reduces their price—and bond yields rise in inverse proportion to falling bond prices. 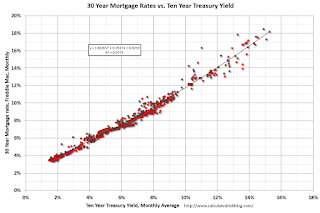 There’s also the anticipation that this will cause future inflation with so much money flooding into the economy at once. The above Calculated Risk graph shows the historical relationship between the 10-year bond yield and 30-year fixed mortgage rates.

That’s why the 30-year fixed rate mortgage rose as high as 6.48 percent in 2006 at the top of the housing bubble. Will this hurt first-time homebuyers in particular? Not if inflation and housing prices don’t rise as fast, and construction can keep up with the rising demand for new homes.