It is a sea change in economic thinking when corporate CEOs that belong to the Business Roundtable sign a Statement of Purpose to consider more than maximizing their profits, when maximizing corporate profits at the expense of their employees, social responsibilities, environment, and the public-at-large has been their reigning mindset until now.

They have just announced a Statement on the Purpose of a Corporation, in which they “share a fundamental commitment to all of our Stakeholders”.

“The American dream is alive, but fraying,” said Jamie Dimon, Chairman and CEO of JPMorgan Chase & Co. and Chairman of Business Roundtable. “Major employers are investing in their workers and communities because they know it is the only way to be successful over the long term. These modernized principles reflect the business community’s unwavering commitment to continue to push for an economy that serves all Americans.”

While each of our individual companies serves its own corporate purpose, we share a fundamental commitment to all of our stakeholders. We commit to:
It was in the 1970s that conservative economist Milton Friedman led the charge against Keynesian economics and government regulation that had rescued America from the Great Depression. The New Deal happened because Americans were willing to try anything to bring back jobs during the Great Depression, for fear that capitalism no longer worked.

A 2016 Forbes article described the Roundtable as comprised of 192 CEOs, and one of the most prominent lobbying groups in Washington, D.C. In 2015, the group spent $19.3 million on lobbying, making it the eighth biggest spender that year, according to the Center for Responsive Politics.

Corporate profits have been on a tear for years, reaching a record share of GDP and Gross National Income in 2018 with the corporate tax cuts. What did they do with those profits? Invested it mainly in buybacks to boost share price and CEO incomes. 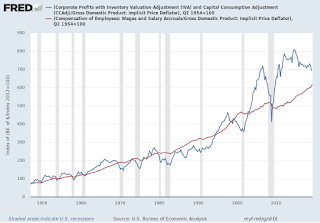 The result was has been record income inequality, as many manufacturing and other high-paying jobs were exported overseas via the growth of multinational corporations in the name of globalization. The FRED graph above illustrates the growth of corporate profits (blue line) over wages and salaries (red line), particularly since the last two recessions (gray columns).

But now income inequality and corporate social responsibility is in the headlines with the upcoming presidential campaign. Senators Sanders and Warren have been the loudest in calling out corporate “corruption”, a code word for using their power to enrich Wall Street and their stockholders, rather than Main Street.

Is this scaring Big Business enough to fulfill their commitment to serve Main Street, as it did during the Great Depression? The tide seems to be turning, as it is becoming increasingly evident that the record income inequality is causing corporations to rethink the role of capitalism in creating jobs that make America a better place to work and live.