In The Age of Anxiety 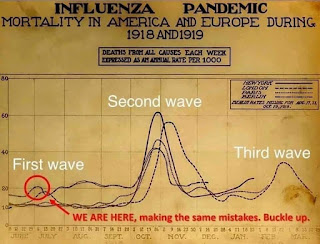 We are now in a full-blown “Age of Anxiety”; not the first, of course. There was as much anxiety during the 1918-20 Spanish Flue pandemic that reportedly killed 50 million in a series of worldwide outbreaks lasting more than two years.

If we do not find ways to lessen anxiety in this age due to the novel coronavirus pandemic, we might seriously experience what Dr. Rick Bright, who was recently transferred from his position as Biomedical Advanced Research and Development Authority director at HHS has described as “the darkest winter in modern history.”


“The mortality of the pandemic could be “unprecedented” and ultimately outstrip the 50 million casualties of the 1918 influenza epidemic," wrote Bright in his prepared testimony,“ without a science-based national response to the pandemic.”

There is much more to the current age of anxiety. New Deal economist John Kenneth Galbraith wrote a book called The Age of Uncertainty in the 1970s that attempted to explain the general anxiety brought on by post-WWII institutions that were no longer stable.


“In it we contrast the great certainties in economic thought in the last century with the great uncertainty with which problems are faced in our time,” he said. “Little of this certainty now survives. Given the dismaying complexity of the problems mankind now faces, it would surely be odd if it did.”

This anxiety has been compounded by a record income inequality, the worst since the Great Depression. A 2018 PEW Research survey showed the wage stagnation of American salaried workers over almost two generations. 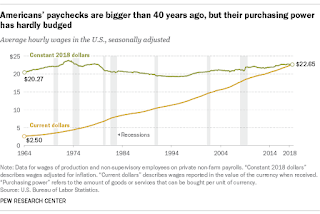 Its study found that today’s real average wage (that is, the wage after accounting for inflation) has about the same purchasing power it did 40 years ago. And what wage gains there have been have mostly flowed to the highest-paid tier of workers, the top 10 percent of income earners.

I have frequently cited Robert Shiller, a Nobel Laureate economist who says anxiety has reached such a level that it is becoming a second pandemic, an anxiety pandemic that is contagious because “stories of fear have gone so viral that we often think of them constantly,” which could delay the recovery because of the public’s irrational responses.


“Business closures, soaring unemployment, and loss of income fuel financial anxiety, which may, in turn, deter people, desperate for work, from taking adequate precautions against the spread of the disease…But, unlike COVID-19 itself, the source of our anxiety is that we are unsure what action to take.”

And that is already happening with news pictures of crowded bars and restaurants  in states like Texas and Georgia, where they haven’t met the 14-day requirement of falling infection rates decreed by the CDC.


“Unless we get the virus under control, the real recovery economically is not going to happen,” says Anthony Fauci, director of the National Institute of Allergy and Infectious Diseases, in a recent interview. He goes on to say that “even if social distancing standards were relaxed, it wouldn’t restore the health of the economy as some protesters have implied it would.”

It is the economic health of Americans that most concerns Americans, which means remedies must be found to curb the rising anxiety, if there is to be something less than a Great Recession or Depression.

And it has to be a united focus of governing authorities on the scientific message that this pandemic is bringing; we are all in this together.