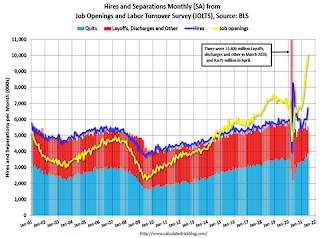 The number of job openings increased to a series high of 10.1 million on the last business day of June (yellow line on CR graph), the U.S. Bureau of Labor Statistics reported on Monday.

It seems many working-age adults aren’t ready to return to work for several reasons, based on early data from Ziprecruiter, an online employment agency. About 13 million Americans are currently receiving unemployment benefits. In some states, they stand to lose them if they don’t actively search for work. That’s because some states have reimposed work search requirements that were waived in the early days of the Covid-19 pandemic.

Ziprecruiter lists which states are terminating unemployment benefits early. “Early indications are that (unemployment) benefits have had some effect on job search,” says Julia Pollak, chief economist at Santa Monica, California-based Ziprecruiter, “but the effect is likely rather small because there are other things that are keeping people out of the labor force,” cited in a MarketWatch article.

She also lists some obvious reasons: The pandemic, which is resurgent in much of the country, and childcare, which has caused droves of workers — largely women — to stop working. Data from the Federal Reserve Bank of Dallas puts this number at 1.3 million.

The Dallas Fed says 31 percent of workers are reluctant, for whatever reason, to return to their previous job. It’s a data point that has increased slowly but steadily for more than a year.

Hires rose to 6.7 million and total separations edged up to 5.6 million in the JOLTS report, which tells us there were one million new hires in July, which then is seasonally adjusted to give the actual unemployment report. Within separations, the quits rate increased to 2.7 percent. The layoffs and discharges rate was unchanged at 0.9 percent, matching the series low reached last month, which tells us that employers are reluctant to lay off anybody with the current labor shortage.

Could record high consumer confidence be another reason employees are reluctant to return to work during the ongoing pandemic? They feel flush with all the $4 trillion in pandemic aid already flowing through the economy, so they can afford to look for better job choices with higher pay and benefits.

The Conference Board’s jobs-plentiful index increased to a 21-year high of 54.9, for starters, and wages and salaries at the bottom end of salaried workers are rising at the fastest clip since the pandemic.

“Consumers’ appraisal of present-day conditions held steady, suggesting economic growth in Q3 is off to a strong start,” said Lynn Franco, Senior Director of Economic Indicators at The Conference Board. “Consumers’ optimism about the short-term outlook didn’t waver, and they continued to expect that business conditions, jobs, and personal financial prospects will improve.”

American workers are perhaps in the best place in decades to take advantage of this economic recovery.

Posted by Popular Economics Weekly at 11:55 AM