Why the American Rescue Plan Is So Important

There are several good reasons for passing the American Rescue Plan (ARP). Firstly, it abolishes once-and-for-all the Reagan-era myth that ‘government is the problem’.

With the thinnest of Democratic majorities, the Biden administration is getting things done; from speeding up of vaccine deliveries, to expanding Obamacare coverage, to requiring masks on interstate and international travel and re-joining the Paris Accord on climate change—all this enabling a speedier economic recovery.

And it benefits so many Americans—more than 60 percent, according to economist Steven Ratner on Morning Joe, in comparing the American Rescue Plan to Trump’s Tax Cuts and Jobs Act that transferred $1.9 trillion in tax cuts to the wealthiest 10 percent of income earners with none of it supporting public spending, whereas the $1.75 trillion in spending from the ARP will benefit programs for more than 60 percent of Americans. 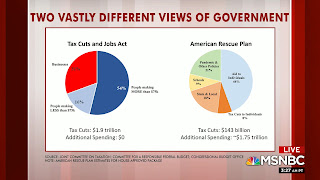 This will include the poorest among US, including minorities and immigrants, according to the PEW Research Center’s latest survey:

“About six-in-ten White (60%) and Asian adults (58%) currently say their personal financial situation is in excellent or good shape. In contrast, a majority of Black (66%) and Hispanic (59%) Americans say their finances are in only fair or poor shape.“

The Congressional Budget Office has said that it could take five years for employment to reach levels prior to the pandemic without the American Rescue Plan.

The ARP’s main objective is to put people back to work as soon as possible, according to Fed Chairperson Janet Yellen.

““I think we should want a rapid recovery,” she said in a recent PBS Newshour interview. “We have a large number of workers who are long-term unemployed, and we have to make sure they’re not scarred to the point where this pandemic has a permanent impact on their lives.”

And speaking of the latest strong unemployment report that created 379,000 more payroll jobs, “at that pace it would take us more than two years to get to full employment,” Yellen said in the same interview. The “real” unemployment rate, after factoring in 4 million who dropped out of the labor force after losing their jobs, was more like 10 percent.

The PEW report said that income differences are particularly pronounced, with a gap of 60 percentage points between the shares of upper-income (86%) and lower-income (26%) adults who rate their financial situation as excellent or good. “About six-in-ten adults with middle incomes (58%) say their finances are in excellent or good shape.”

The ARP should also boost consumer sentiment now at a six-month low in the U. of Michigan February sentiment survey, with the entire loss concentrated in the Expectation Index and among households with incomes below $75,000 (the income brackets targeted by the government cash payouts), as I said last week.

“Households with incomes in the bottom third reported significant setbacks in their current finances, with fewer of these households mentioning recent income gains than anytime since 2014,” said the U. Michigan survey.

Need we say more? This is why the American Rescue Plan is so popular with a 76 percent approval rating per the latest Politico survey.

Posted by Popular Economics Weekly at 7:00 AM